Isle of Man TT vs MotoGP – What are the Differences?

For decades MotoGP has been known as the premier class of racing and enjoys being the most televised motorcycle event in the world but, like everything, times change and with the explosion of alternate viewing options, other motorcycle events are reaching new heights of popularity.

Most notably World Superbikes and the Isle of Man Tourist Trophy (IOMTT or TT for short).

Now I will admit I know almost nothing about either of these but the one I am urged to follow more and more these days is the Isle of Man (sorry Superbikes).

Not only have I been urged to watch I am told the trip to the Isle itself is well worth the time and cost. The event itself – a once in a lifetime experience.

After a two year break the TT was finally back for 2022 and while no records were broken it was an event fans were very excited to be attending once again. 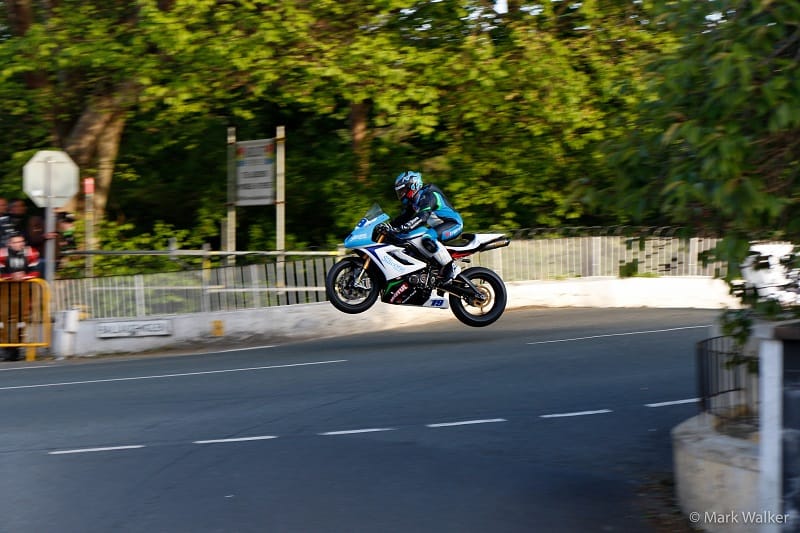 The stories from those I know who have made the journey are incredible and always include phrases like ‘nothing I’ve ever seen before’ and ‘death defying action from start to finish’.

It made me curious. What is it about the IOMTT that creates such hype and has the reputation for being the deadliest sporting event in the world?

So, if you too are new to this incredibly exciting and death-defying event, here is what I learnt about the IOMTT. I hope this will help you get started.

As a MotoGP fan we are lucky to be treated to 19 rounds of racing a year around the globe leaving plenty of options to go along. The  TT is held just once a year across May and June in one of the more isolated and rugged places around the UK. Access to the island is by ferry and flight only.

The tiny Isle of Man is situated between Britain and Ireland. It is home to approximately 80,000 people and is known for a rich Gaelic history (including lots of castles if motorcycles aren’t your thing). 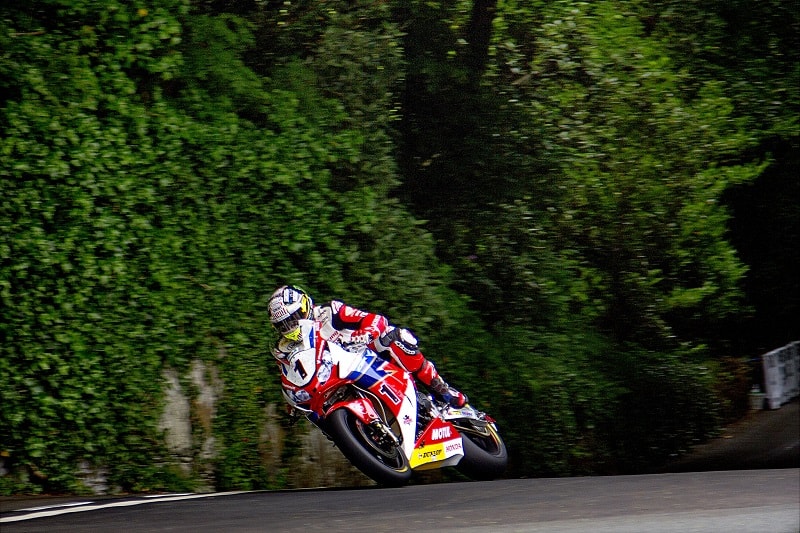 What is the Tourist Trophy?

Unlike a MotoGP events which lasts only a weekend, the Isle of Man TT is two weeks of hair raising, nerve shattering action.

The event itself consists of a week of practice/qualifying followed by a week of qualifying and racing.

The Oxford Companion to World Sports and Games describes the event as follows:

“The oldest motor-cycle racing circuit still in use is the Snaefell Mountain Course over which the Isle of Man Tourist Trophy races are run.

Starting at the town of Douglas on the south-east coast, the course takes a wide sweep to the west and north to enter the town of Ramsey on the north-east coast and back again.

It climbs from sea level to an altitude of over 396 m.

This circuit is the epitome of the natural road course, all the roads used being ordinary public highways closed for the racing and practice sessions.” 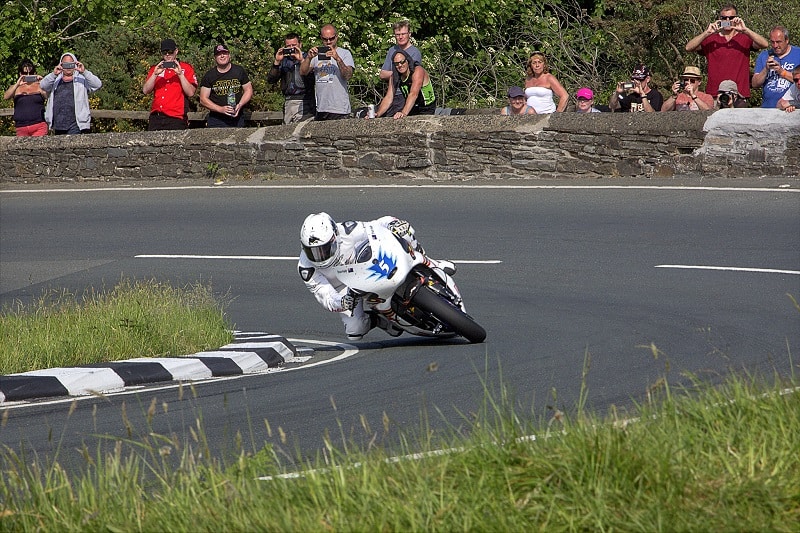 What does the TT Stand For??

The race started in 1907 and was intended for motorcycles similar to those sold to the public which were known as “touring machines”, hence the title of “Tourist Trophy” or now just simply known as the “TT”.

Is it part of a Championship?

No, the TT is a stand alone event with riders coming along from other competitions such as World or British Superbikes and other Road Racing championships.

Can Anyone Ride in the TT?

Many would be interested to know they do have an amateur section in which anyone who has made qualifying times for the Manx GP, an amateur Road Race Event seen as a practice run for TT.

You will also need a racing licence (British) for a minimum of 1 year prior to signing up for the TT.

In the likelihood that this is something on your bucket list and you have the required motorcycle (maximum 750cc), you will be able to race in the newcomer category.

Entering is one thing, completing or even winning …. well that’s another matter altogether. 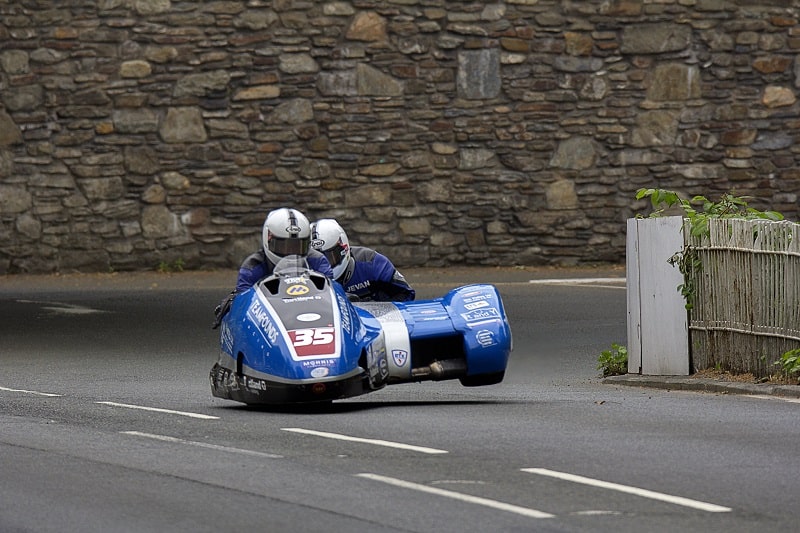 MotoGP and IOMTT – a shared history

However, due to the vastly different style of racing circuit a protest started by Agostini in 1972 gained traction with other riders siding with the MotoGP legend when he stated “he would never race again at the Isle of Man”, declaring it too dangerous for international competition and that it was outrageous that such a race should ever be part of a scenario professional riders were forced into.

After 1976 the race was stricken from the championship and replaced by the modern British GP.

This means in modern day racing as we know it ,the TT is a voluntary competition event – it is not part of a championship in which riders and teams must compete such as the case in MotoGP (however please note it is not actually compulsory to compete in every round of MotoGP but the reasons for not participating are more about team capabilities and finances not choices about which tracks they want to ride). 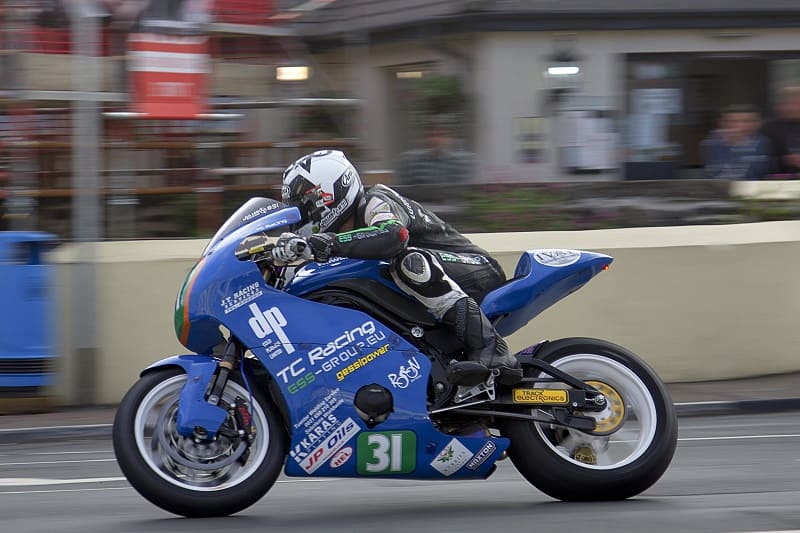 Since its beginning in 1907 there have been 155 official TT deaths. This means during practice, qualifying or racing. In 2022 6 riders died making it the deadliest year since 1970.

If you include the August racing (Classic TT and Manx Grand Prix)  there have been 266 deaths in total.

The high death toll is due to the use of public roads amongst trees, pavement kerbs, telegraph poles, lampposts, buildings, street signs and the many brick walls (many over 100 years old) that hug the roads used for the course.

MotoGP has seen only 103 deaths since its creation and this has dramatically dropped in the past few decades to the point where a death in MotoGP is a rarity. The same cannot be said for the TT with it being known for the fatal risk it carries.

What gladiators. Reminds me of F1 drivers from 50s/60s. Racing for passion + glory not money or anything else. Ultimate sacrifice for the ultimate satisfaction and performance. Visiting the TT is a life changing experience. Total respect to those who didn’t make it through RIP

The unofficial top speed for the TT is 332 km/h (206mph) which was set in 2006 practice by New Zealander Bruce Anstey.

Remember the TT laps are about 60 kms (37 miles) each compared with a much shorter circuit for MotoGP. The longest MotoGP track at present is Sepang with a length of 5.47 kms and takes only a couple of minutes on average to complete.

This means on average the MotoGP rider is racing for a maximum of about 45 minutes.

Compare this with even the shorter 4 lap events at the TT which will have the rider taking over an hour and the longer 6 lap events taking about 90 minutes. This is double what a MotoGP race will be. That is a lot of stress on the body and concentration over a long period in a very unsafe environment. 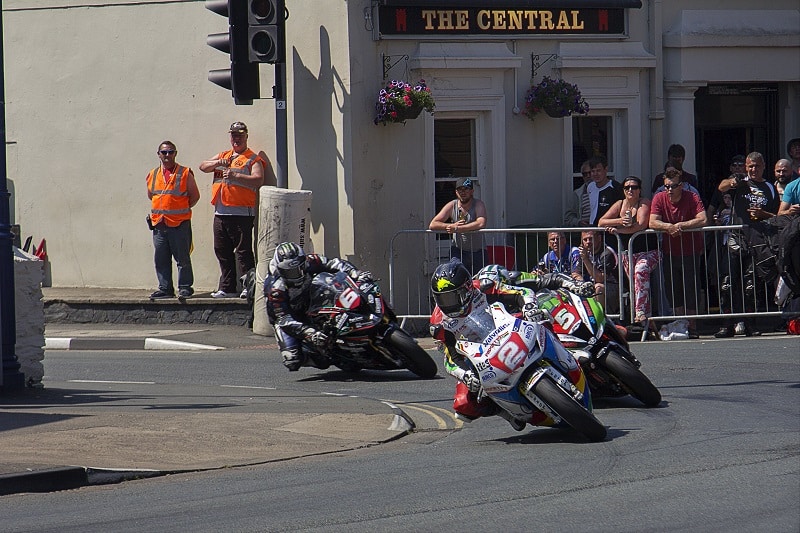 The main difference for the classes when comparing the two is the fact riders may compete in different classes at the Isle of Man TT.

This is not the case for MotoGP where riders are contracted to teams for different classes and may not, without invite, switch classes.

The aim in MotoGP is to get on the premier class bikes with a manufacturer after proving yourself in Moto 2 or 3 or both.

You also need to wait for a contract opening in MotoGP.

Since Isle of Man is a voluntary competition you do not need to wait for the opportunity you can make it yourself.

The classes for Isle of Man are as follows:

Includes a mix of 600cc four-cylinder and 675cc three-cylinder sports based motorcycles. Modifications are allowed. This class competes in the Monster Energy Supersport Race 1 and 2 consisting of 4 laps with a total race distance of 242.88 kms or 150.92 miles.

These are derived from standard production bikes with a capacity of 1000cc. They must maintain the same profile as a road bike. Engine tuning and chassis improvements are allowed within guidelines. This class competes in the RST Superbike Race & Senior Race consisting of 6 laps and total race distance of 364.32 kms or 226.38 miles.

1000cc production sports motorcycles which are restricted to remain as close to what the public can purchase from a showroom. Only limited modifications are allowed. This class races in the RL360 Superstock Race which has 4 laps and a distance of 242.88 kms or 150.92 miles

This class is for zero emission prototype electric motorcycles competing over one lap of the TT Mountain Course. This class is now on hiatus.

This class is the newest addition to the TT schedule and features twin-cylinder 700cc machines derived from middleweight road going motorcycles. In this class extensive modifications can be made by tuners and engineers to turn these bikes into racing machines suitable for the TT course. This class race in the Bennetts Supertwin Race consisting of 4 laps with a total race distance of 242.88km or 150.92 miles.

The Sidecar racing class features machines with purpose built chassis Piloted by a driver and a passenger. TT sidecars are powered by 600cc 4-cylinder, 675cc 3-cylinder, and 900cc parallel-twin engines. The driver and passenger must work together in order to be successful. This class race in the 3 Wheeling Media Sidecar Race 1 and 2 consisting of 3 laps and a total race distance of 182.16 kms or 113.19 miles. 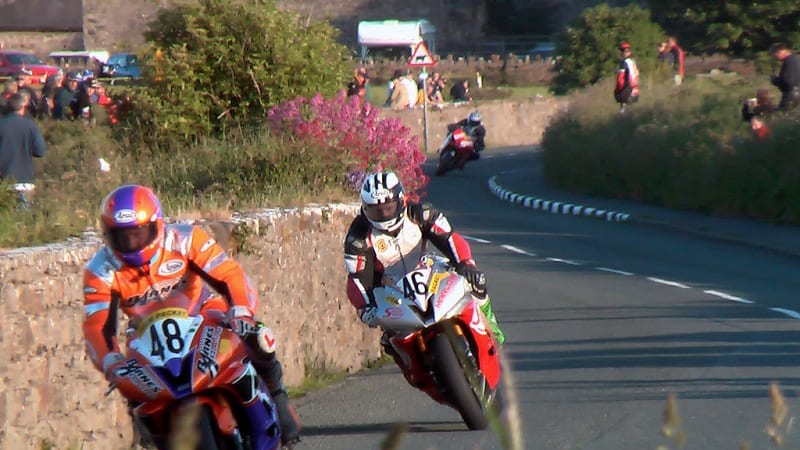 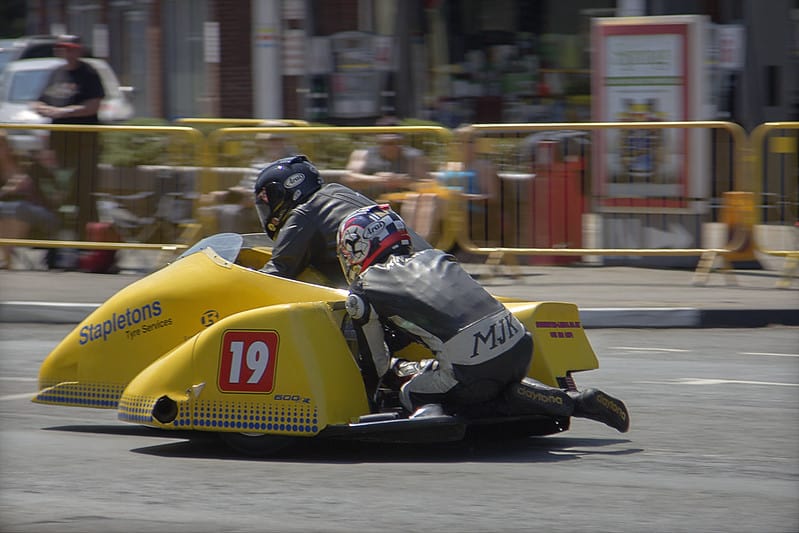 What do MotoGP riders think of the TT?

As Valentino Rossi once said:

I did a lap of the Isle of Man, and I understand why people love this because it’s f**king awesome – it’s unbelievable, great. But, unfortunately, it’s too dangerous. Sometimes, riders are crazy.’
‘The Isle of Man is very difficult. If you make a mistake, maybe it’s the last mistake.’

While we can agree there are plenty of differences between the two Racing events there is one thing that is exactly the same – the thrilling action coupled with incredible talent on the part of the riders year in and year out keeps the fans coming back for more!

I can honestly say Isle of Man has at least one new fan who may one day make the journey to see it in person.