Words and pictures by Val Blundell and Ray Biddle 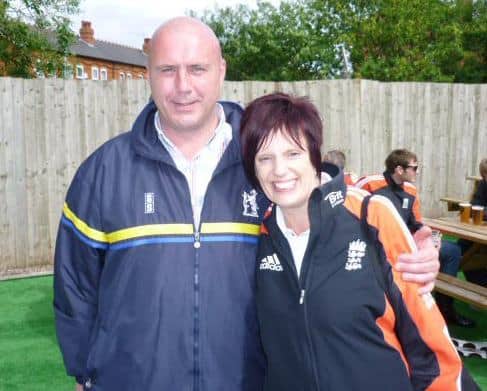 You know when those annoying adverts pop up on your Facebook and 9 times out of 10 you ignore them?

We’ve all been there.

Well there was an ad that kept popping up for luxury camping at the MotoGP which I kind of half looked at but we’d already decided by then we were going to book a B&B for a couple of nights as me being me (fussy) I like my home comforts…hairdryer, straighteners, ect..

Never camped in my life before (apart from the back garden)..

Don’t drive.. so no car of our own to carry too much kit about..

Emailed the guys asking a few questions about the whole set up and was very impressed by their quick response and friendly approach to everything.

We had nothing to lose basically so we took the plunge.

True to their word..they contacted us a week before the GP with final details of where to go & what to do.

We arrived at Whittlebury Park on Friday morning after the monsoon that hit Silverstone on Thursday night…the worst storm to hit the UK in 60 years or something?

Surely it was going to be hell on earth?

We were met by Alex…instantly recognisable from the photos on the website, who kindly offered to help us take our bags to our pre-erected tent.

*Thanks for carrying the heaviest bag with the beer in*

Already we were thinking, yeah this is pretty cool!!

Before we’d even had time to settle in our tent…Nina popped up asking if we’d like a beer?

We were beginning to enjoy this more and more by the minute.

The campsite was a bit damp but nothing like we’d feared but luckily I’d chosen to take walking boots as well as flip flops!!

We made our way to the circuit for free practice to check out the walk from the our tent to Silverstone. Don’t think there could have been a more scenic route.. a substantial path took us past the rest of Whittlebury Park, past a stunning lake with geese & swans, through a lovely wooded area before entering a field that took us to Gate 6 at the Silverstone circuit.

Took at most 20 minutes to get there.

Perfect and exactly as the IntentsGP website had promised.

After a hectic 1st day we made our way back to the site….admit a little part of me smiled as we passed newly arrived campers setting up their tents in the gusts of wind that descended on Northamptonshire. Was great knowing that we didn’t have to do that!

Met the rest of the guys & gals from IntentsGP & collpased in our tent.

As the sun set over Whittlebury, we spent the night listening to bikes going round Silverstone and various tv’s aound Whittlebury showing the football.

Live bands played on into the early hours and so ended a brilliant first night.

Was quite an experience.

Headed off to the shower block which was the bit I was unsure about having never done anything like this before…well not since school MANY years ago!

Spotless despite the mud…the hottest shower you could wish for..hair dryers provided..and somewhere to plug in my straighteners!!

Hit the marquee at 6 to be met by the lovely hard working Olwen who was getting everything prepared for breakfast.

Toast. Cereals. Juices. Tea. Coffee. All provided as part of the IntensGP service.

Bacon butties at £2.50 (made by Alex) were out of this world considering we’d paid £4.90 at Silverstone…with NO sauce!!!

You could also charge up those all important phone and camera batteries in the marquee too. 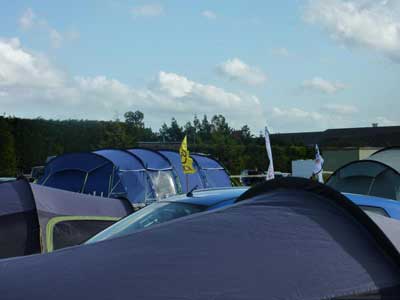 I don’t think we could have been treated any better had we stayed in a B&B or hotel.

The whole experience from start to finish was fantastic.

We were made to feel so welcome by Alex, Olwen, Anthony, Nina & Phil that we came away feeling we had made friends for life.

Whether you’re novices like us or seasoned campers, this is a great way to spend a relaxing, hassle free camping experience.

I cannot recommend them highly enough.

I don’t think we’ll do it any other way from now on…even if we go abroad sometime, it will definitely be at a circuit IntentsGP are covering.

Our deposit was back in our account by the following Friday….could not fault a single thing that these guys had done.

The team worked really hard and battled the elements to make sure everyone had a pleasurable stay.

I know they tripled that effort for the the F1 weekend as that was a whole lot worse weather wise.