Each race weekend we wait to hear who has made pole position and often tune in just prior to the race to find out the starting grid.

But how does MotoGP qualifying actually work, how is Q1 and Q2 determined and what is the role of Free Practice in bringing us the starting grid?

First let’s look at what we hear about the most: Q1 and Q2.

This stands for Qualifying 1 and Qualifying 2, referred to in the rule book as qualifying practice 1 and 2.

Both are 15-minute sessions held on the Saturday afternoon and determine the final starting grid.

For those new to MotoGP you will notice if you tune in for Qualifying the field of riders is already divided into two groups with positions on the grid.

How does this division of the field occur?

The term timed here does not refer to the duration but rather that the lap times are counting towards qualifying.

The times are used to calculate qualifying as follows; the 10 fastest times recorded across those timed sessions go directly into Q2. The remaining riders will go into Q1 where they have a second chance to get into Q2 and therefore possibly pole position.

The starting grid for qualifying will be arranged based on their times in FP1, 2 and 3. 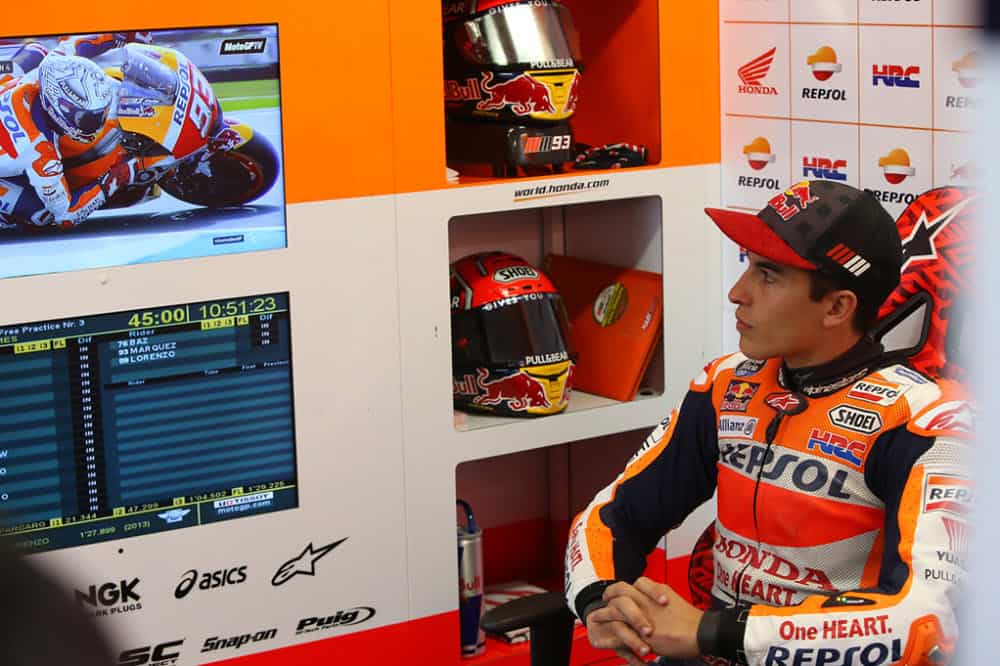 Marc Marquez watching himself in FP3. Image courtesy of Box Repsol on Flickr

Q1 will determine the positions of 13th plus on the grid.

Q2 will determine grid positions 12th down to number 1.

The aim here is to be the two fastest bikes in Q1 as they will get a second chance at pole by moving up to Q2.

Riders in this position will be allocated extra tyres to allow for the extra track time. For more on tyre allocation see our tyre article

This is also the case if qualifying is declared wet; tyre allocations are adjusted accordingly.

What is this you ask?

It’s a simple calculation I promise – for example if the fastest time is 100 seconds, then all other riders must put up a time of 105 seconds or less to qualify.

If they fail to make this time they start from the back of the grid.

If they fail to make the qualifying time in Q2 they start from 12th.

A rider may be in this position, for example, if they crash or for some mechanical reason cannot complete the sessions required.

If either qualifying is cancelled or both then the starting grid will be determined by the best combined times from free practice.

In the case of only Q1 being cancelled, then the 11th and 12th fastest riders from FP1, FP2 and FP3 combined will go through to Q2.

What is Free Practice 4?

Free practice 4 is a 30-minute session but is not timed regarding qualifying and is held before the qualifying sessions and is really the only true free practice of the four sessions.

This gives riders a chance to warm up and make any last-minute changes needed, for example in the event of weather changes or repairs.

It is interesting to note that the rules state grid positions once determined (around 60 minutes after the final timed free practice for that class and just 5 minutes between Q1 and Q2) are final and not subject to any protest or appeals and will not be revised for any infringements discovered after their determination even if reported to FIM MotoGP Stewards.

The only allowance the rules give for adjustment is as follows:

…In the case of a rider qualifying for QP2 and subsequently withdrawing from the event, the list of riders to take part in QP2 will be revised no later than 60 minutes after FP3, with the next fastest rider from the FP1, FP2 and FP3 sessions taking the place of the withdrawn rider.

While many watching skip right over qualifying and the FP sessions figuring it’s the race where all the action is, they are missing some of the most action-packed track time of the weekend.

From the first practice on Friday the riders are pushing the limits aiming for Q2 and pole position.

The name free practice can be misleading because these sessions have very important results riding on them. 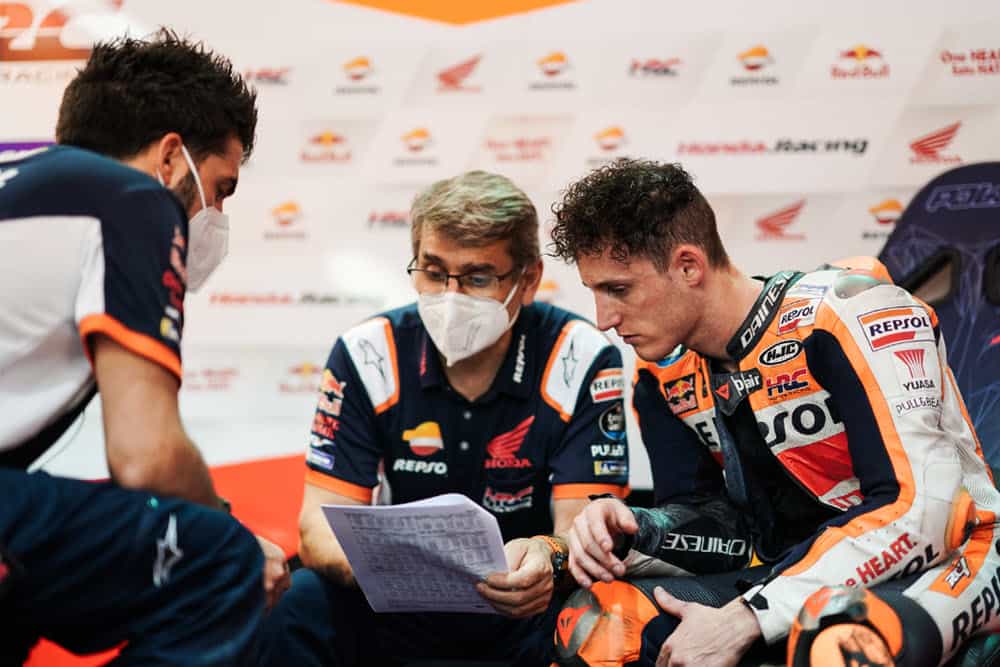 However, we can’t underestimate the Q1 riders, many assume this is the back end of the field, the slower riders and that’s simply not the case.

Due to the MotoGP format of collecting up the times from the FP sessions to divide the field for Q1 and Q2, no rider is safe from finding themselves in Q1 on the day.

A crash, mechanical issues, physical injury or even a penalty can change the game on race weekend.

We do quite often see big names, factory bikes, and even the championship leaders in Q1 because of poor times in the free practice sessions.

The golden opportunity to fight for pole again if you top the Q1 leader board results in the Q1 session being an action packed 15 minutes well worth tuning in for.

It’s rare, but the way they have it set out, technically, the slowest rider across all three free practice sessions can still find themselves on pole.

Simple really, during FP sessions if a rider fails to produce a time fast enough for Q1 (top 10 times of the FP sessions) then they will find themselves in Q1 – 13th and below, but let’s say the rider had some issues getting the bike set properly for the track in question and by Q1 on Saturday they have this sorted.

Now they are back in their top racing form and are the fastest of Q1 – this means they get to move up to Q2 which decides the 1st to 12th position on the grid.

Now, let’s assume they are the fastest in Q2 and make pole.

Meaning one of the slowest riders of the FP sessions is now sitting on pole. Rare but it happens.

Free Practice in MotoGP vs F1

In F1 free practice sessions earlier in the weekend are just that, practice sessions where they test setups, fuel loads etc and unbelievably some teams don’t even participate choosing to sit back and watch others instead.

I’ve heard this is among some of the most boring parts of an F1 weekend.

Not the case in MotoGP.

If you are coming to MotoGP after being a fan of F1 then you are in for a treat because with MotoGP this is not just the race which is exciting and action packed.

In fact, it is the entire weekend and if you have access to the sessions starting Friday, I urge you to watch those sessions.

With MotoGP the thrills and spills start on that first practice session on the Friday – we don’t need to wait for Sunday.

So, if you don’t already have access to the FP sessions this fan suggests getting on it before the end of summer break, you will not be disappointed especially now you understand how it works and what all the sessions mean in the lead up to qualifying.

Below is a flowchart which we hope will help you better understand the MotoGP qualifying sequence. 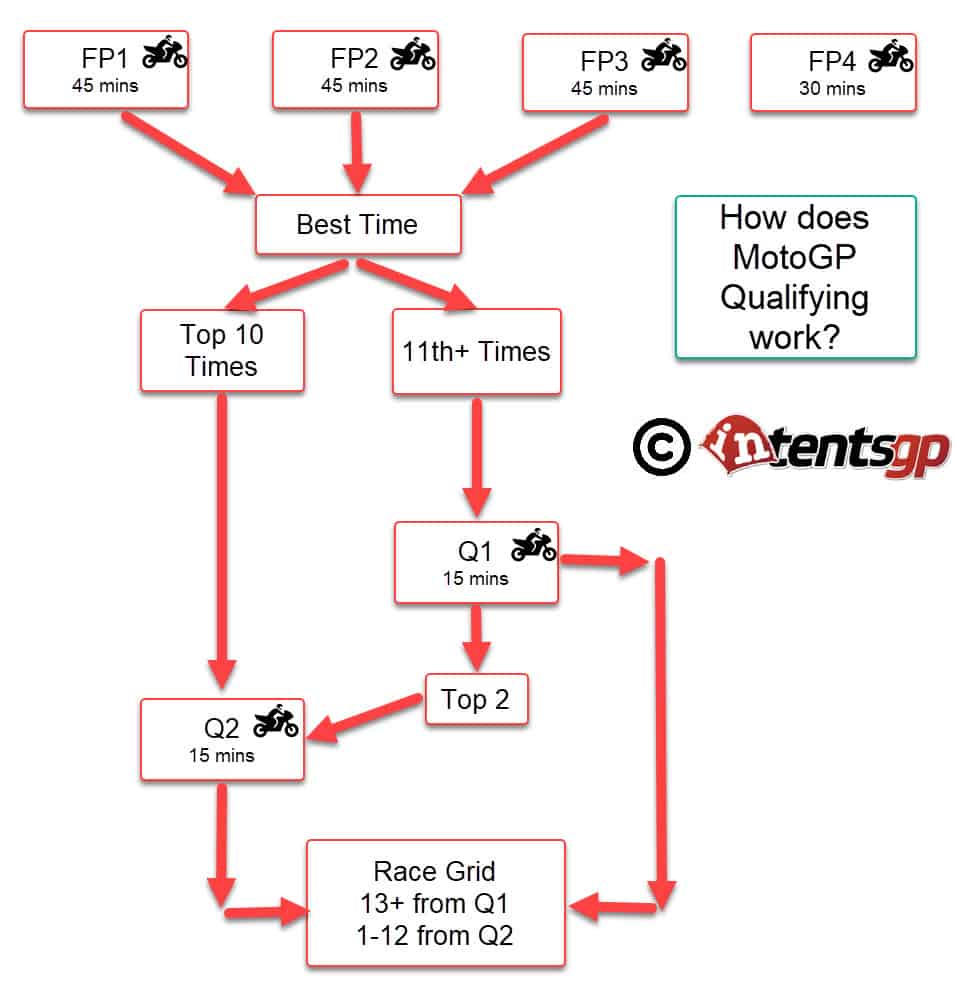