What are the MotoGP Bike Handlebar Buttons?

Beneath the windshield of a MotoGP bike sits a dashboard and a series of buttons to assist riders to control the bike beyond the standard throttle and braking levers.

These buttons are, for the most part, out of the viewer’s field of vision.

They also differ slightly in position, amount and colour from manufacturer to manufacturer but perform basically the same functions.

These colourful buttons are known by a few names such as mapping panels or buttons, switch panels and strategy buttons.

Let’s find out what this system does for the riders during a race and why they are important.

First, we need to understand why these controls are in place and where they can be found on the bike.

Data collected during practice and qualifying helps to set the bike to suit the conditions at the start.

However, much occurs during a race. Tyres and brakes wear. The bike becomes lighter as fuel is consumed.

With weather conditions that could change rapidly as well as the small matter of other riders battling with you and a host of other variables mean changes must be made during the race and riders do not have the benefit of a pit stop to make these adjustments.

The colourful buttons you may catch a glimpse of on the rider’s handlebars are their mapping programme controls.

While a rather small LCD screen serves as the dashboard tucked up beneath their windshield.

This screen displays important information such as temperature, RPMs, track temp, best lap times and which mapping programme they are currently using.

Their team can also communicate certain messages to them on this screen. Along with their pit board it is their only real source of information during the race.

There is limited opportunity for a rider to view what the system is telling them on this dashboard.

This is one reason teams try not to relay too many additional messages to their riders during the race so that they are left to concentrate on the job at hand.

We should consider how much finesse is required by the rider to look at this screen, make a decision on which adjustments need to be made to achieve their desired outcome. All this whilst riding on the limits of adhesion or at maximum speed!

The straights can provide a few seconds of time but when you are riding at more than 250 km/h, it’s a skill that takes a lot to master. But master it they do and by doing so they can change the performance of their bike to immediately adapt to new conditions or situations.

Riders like Cal Crutchlow like a lot of their data to be displayed during the entire race, such as best lap time and engine maps selected. Whereas other riders prefer limited information and use lights instead. The system is highly adaptable to what each rider prefers.

So, what exactly can they control during the race via these buttons?

Engine Brake Mapping provides the rider with the ability to adjust the throttle response and remove power from the engine therefore conserving their brakes. This adjustment can also help conserve fuel and manage the rear tyre to stop it from sliding around so much.

Traction Control Mapping functions mostly as a safety feature to provide better traction during acceleration. This can be very useful when it rains or if there are other issues maintaining the tyres for the duration of the race.

Anti-Wheelie or Launch Control Mapping can reduce the power to the engine when it recognises the front tyre has left the track surface. A rider can choose to have the bike respond slightly or aggressively depending on the real time needs of the rider and what they are trying to achieve at the time.

Fuel Adjustments have an impact on the throttle opening and how much fuel will be used. This can be incredibly useful for certain tracks such as Motegi and Austria where getting to the finish line can take some finesse with the settings of the bike.

The Pit Limiter Button is used to bring the bike down to speed for pit lane entry. It can also be used at other times. And finally, the kill switch (usually black) as part of the rider’s controls to shut the engine down if required.

There is one other control lever the riders have and that is for the ride height control device. This feature will adjust the height of the rear of the bike or lower its centre of gravity upon acceleration and prevent a wheelie. This is helpful on take off and exiting corners. Much more information about the ride height devices is available in our article here.

This is a contentious issue with many feeling this device’s features have gone too far and as a result from 2023 front height device units are banned.

For the most part this is a manual feature the rider must operate, Aleix Espargaro has been using an automatic version but stated recently while racing in Aragon he prefers the manual version.

Looking at the Pramac Ducati the colours of the buttons are as follows: Yellow adjusts the Fuel usage, Blue controls the launch or traction control, Red adjusts the Engine Power Programme and Green is for the Engine Brakes. 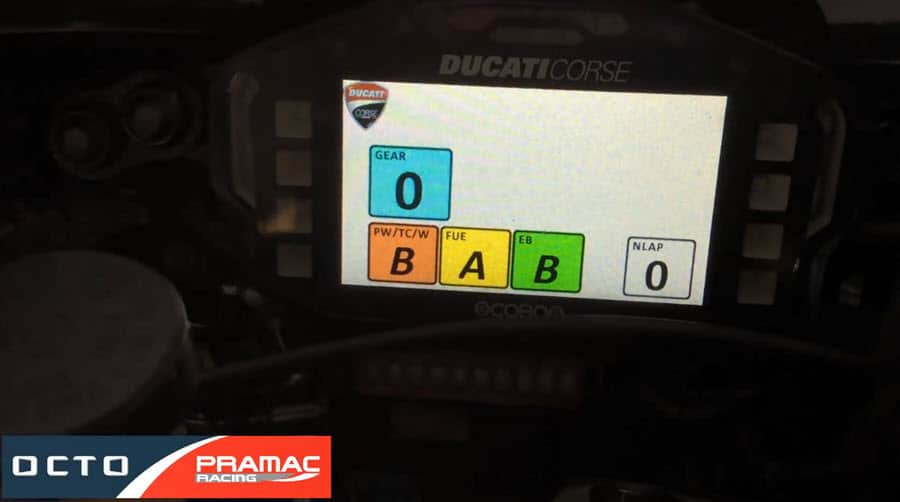 How often will a rider make changes?

It really depends as Scott Redding has pointed out there are instances where a rider may only use it a few times during an entire race and others, especially if conditions rapidly change, they may make changes every few laps.

As mentioned above depending on the track itself will also impact on how the riders use these controls especially with the addition of ride height devices.

For example, in Austria it is more likely they will use the Engine power and Fuel mapping in conjunction to conserve their fuel at this fuel guzzling track.

The tracks where cornering and tyre wear are the issue then heavier use of the engine power and engine braking programmes will be seen in the data reports.

As mentioned above, Aleix Espargaro mentioned preferring the manual ride height device over the automatic on at this track specifically due to the layout of the track making it difficult to make too many adjustments.

There really is no limit as to how the rider may choose to utilise these functions.

Engine Mapping Controls were not always in the rider’s hands

Engine mapping adjustments were once made by the engine automatically and the rider had no control.

This meant they had no control over brakes, tyre sustainability and fuel consumption.

Some may argue isn’t it enough they are riding at more than 250km/h or leaning more than 60 degrees at times, while trying to win and not crashing?

You may even ask isn’t it about racing and not conserving fuel or tyres to make it to the end?

But without control, going as fast as you can is not really the best plan.

Allowing the rider to have control over the engine mapping during the race has been a game changer.

This was seen with Marquez in Motegi 2019 finishing the race in first place with less than half a litre in his tank and needed the help of KTM Tech 3 rider Hafizh Syahrin to be pushed back to the pits on the slow down lap.

Theoretically Marquez could have run out of fuel giving Quartararo the top step on the podium. 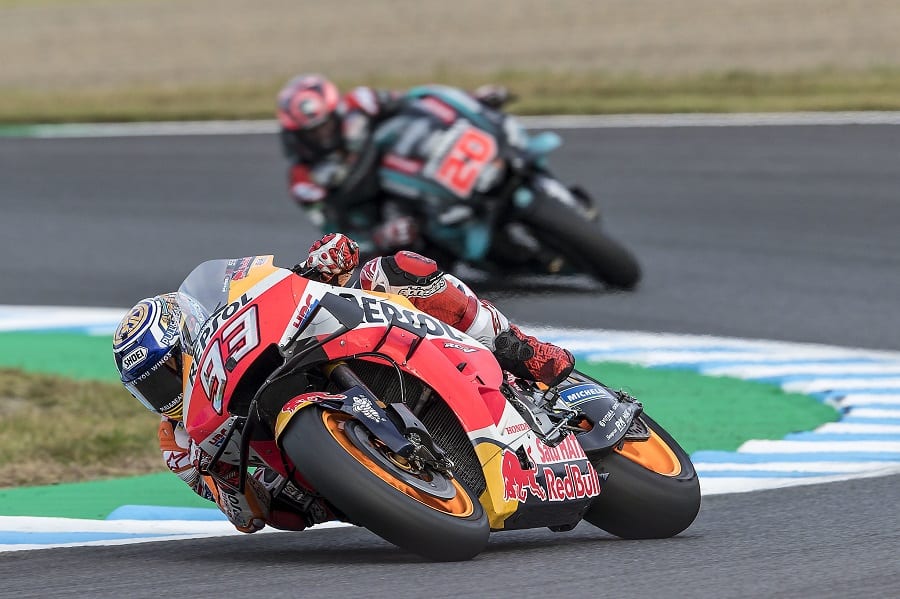 Marquez with Quartararo in pursuit at Motegi 2019. Image courtesy of Box Repsol on Flickr

Before 2016 that’s exactly what would have happened. The Repsol Honda would have made automated adjustments and taken away some horsepower. In this situation the rider could do nothing to override this and would be forced to fall further and further back in the final laps.

Thankfully, Dorna did away with this type of programming and implemented a low-tech software solution.

Therefore, in this case Marquez was able to control his own engine mapping, making real time adjustments to ensure he could make it to the finish line and hold his first place before he ran out of fuel.

Many watching may have assumed the second and a half he lost on his lap time during the last 2 laps was his tyres starting to wear as we often forget they have such limited fuel available to them during a race.

Rarely do we see a rider run out of fuel but it does happen as fans witnessed when Johan Zarco ran out of fuel just shy of the chequered flag at the Misano GP in 2017.

In an heroic effort after 28 laps in the rain he pushed his Tech 3 across the line determined to finish.

So there you have it, a quick guide to the available mapping programme controls a MotoGP rider has at their fingertips and how getting it right can make all the difference some days.