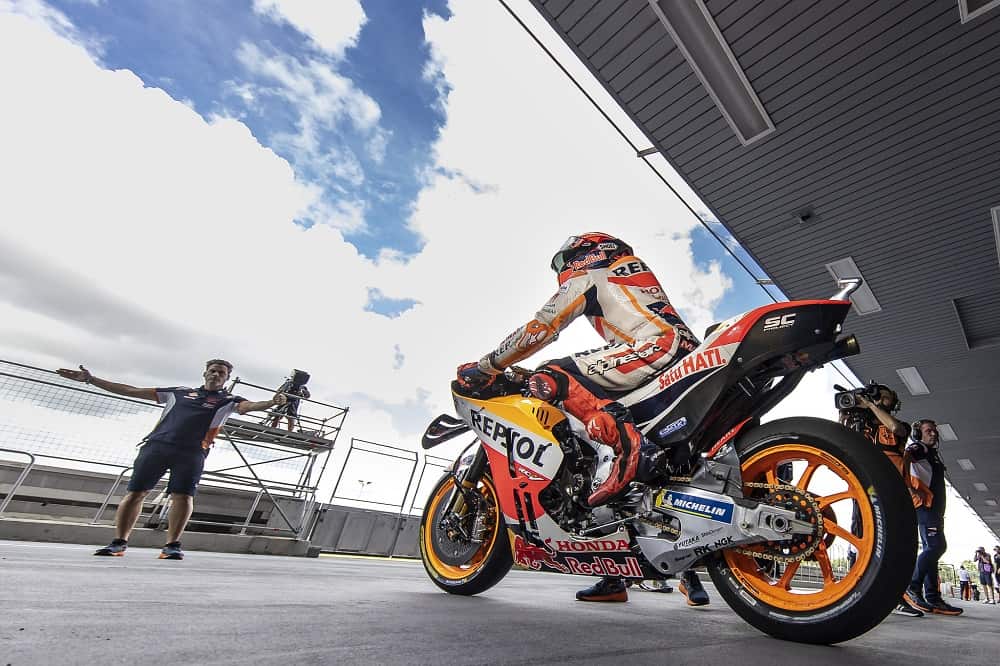 If you are new to MotoGP or just looking to brush up on some basics about these incredible machines look no further, we have you covered.

Something that cannot be disputed is how important gear changing is when it comes to MotoGP racing and many people ask how exactly MotoGP riders change gears and how they do it in such a smooth manner on such powerful bikes.

The answer is like all motorcycles they are manual. This might surprise you considering how smooth the bikes are on the track.

In the following article we will explain exactly how the MotoGP gearbox works.

What kind of transmission do MotoGP bikes use?

All MotoGP bikes use what is called a seamless transmission.

This is different to the standard transmissions found on street bikes.

In one way, street bikes and MotoGP bikes are similar, to change gears you push a foot lever.

However, due to the nature of MotoGP racing there are a few extras available to a MotoGP rider including:

all working together to gain maximum performance from the bike.

What is a seamless transmission?

If you have ever ridden a bike, you will know there is a lag or pause when disengaging the clutch and changing gears.

Essentially a seamless transmission is designed to eliminate this and facilitate fast, smooth gear changes under all conditions.

Behind the engine and rider, the transmission is the most important part one might argue.

The perfect working of the transmission affects the overall efficiency of the bike including fuel consumption, tyre conservation and wear.

Any loss of stability or efficiency has an impact on their speed. This, of course, is not good when championship points are in play.

With a seamless transmission this hesitation or even jerking as the gears disengage and re-engage does not occur allowing a completely smooth transition between gears.

To achieve this there is a mechanism which actually allows the gearbox to be in two gears at the same time for just a moment.

It is in fact only around a few hundred milliseconds. But it counts when it comes to race times.

This mechanism within the gearbox allows for the bike to be in two gears at the same time while only allowing one of those gears to transfer the power to the rear wheel.

This mechanism works like a ratchet locking one of the gears in place and the other disengages.

Do MotoGP bikes have a clutch?

Yes, MotoGP bikes do have a clutch which riders generally use only at the beginning of the race to start from neutral after which they use something called a quick shifter.

However, a MotoGP bike uses what is called a slipper clutch.

The slipper clutch mechanism that allows the rider to change gears with a minimal disconnect between engine and gearbox during the shift.

What is a Slipper Clutch?

To be technical this is a torque limiting device and stops the clutch from fully meshing until the engine speed matches the bike speed and ensures there are no sudden jerks of the bike.

This is especially helpful to the riders when cornering to maintain their speed and focus on the corner instead of their gear changing so much, helping to reduce lap times overall.

There was a time these style of clutches were only for MotoGP bikes. However, they are now making their way onto street bikes.

What is a Quick Shifter?

This is a mechanism that allows the rider to change gears without using the clutch itself. It uses what is called a microcontroller with a central processor unit to sense pressure on the gear and cut off the ignition when the new gear is engaged.

This will prevent excess loads on the transmission during gear changes.

Riders do not have to use this and can use a regular clutch. It comes down to rider preference.

These mechanisms are also available to have fitted on street bikes and have the added advantage that the rider does not need to use their clutch or worry about throttle control during gear changes. Again, of special benefit to MotoGP riders.

How do the gears work on a MotoGP bike?

MotoGP riders change gears by pushing a foot lever, just the same as a street bike however there are a few differences.

There is a question whether MotoGP bikes even have neutral and they certainly do.

In most motorbikes neutral is between first and second but on a MotoGP bike it is below first gear.

There is a lever that allows the bike to go into neutral. These changes are to prevent the bike going into neutral during a race.

The gears on a MotoGP bike are also in reverse order than a regular street bike.

Meaning the rider will push down to change up through the gears and up to move down.

Why is the gear shift pattern the opposite of road bikes?

With a maximum lean angle of around 65 degrees and on a left hand corner, the MotoGP rider really does not want to have to get his toe under the gear shift to change gear as he accelerates on the exit of the corner.

It is far easier and safer to just press down on the gear shift. See the image below to show the problem with a magnified inset to highlight this.

On a right hand corner, it is easier but as you can see in the image below the rider does not want to have to again get his toe underneath when he has leaned over so far to the right.

It’s considerably easier to press down. Magnified inset to highlight this. 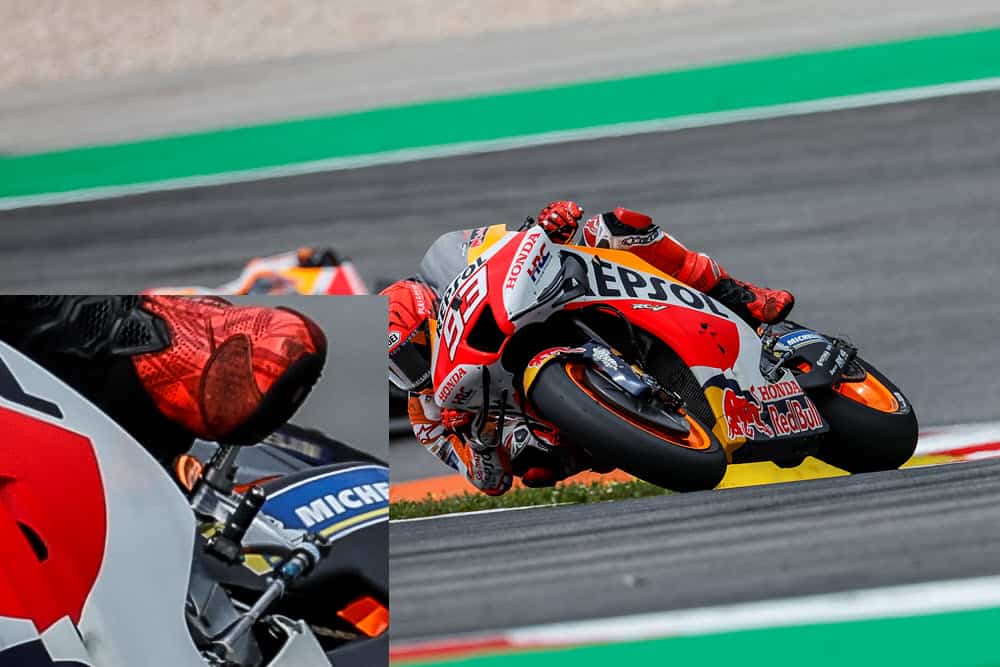 When downshifting, the MotoGP rider will nearly always be under braking and it is far easier for the toe to be under the gear shift.

Notice also how the rider is pushed forward under braking which again makes it easier to get the toe underneath. (overexposed inset in the image below) 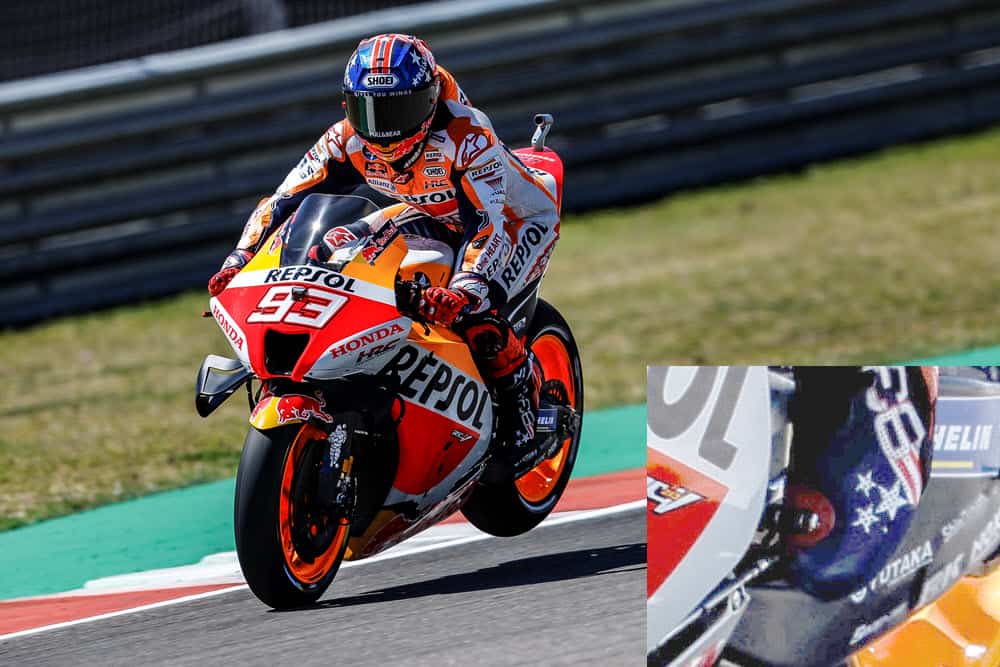 How many gears does a MotoGP bike have?

A MotoGP bike has six gears in the gearbox, the highest gear is at the bottom with the lower gears above, and gear one at the top.

This has become standard practice on every MotoGP gearbox.

Why is a seamless transmission so important in MotoGP?

Benefits of the seamless gearbox in racing include, increase in power, an increase in throttle control during gear changes as mentioned above and it can decrease the weight of the bike.

Essentially it comes down to controlling the power of these incredible machines.

They are pretty much going as fast as they can. Regardless of electronics and so on it is difficult to control some natural functions of a bike.

For example, the front wheel lifting is a very difficult thing to stop on a MotoGP bike.

There is little they can do to increase the speed, but they can increase control and therefore gain use of the power and speed they do have available to them.

This means like everything on a MotoGP bike it undergoes constant and intense maintenance routines in order to ensure it performs as it needs to every time without fail.

These units even have their own mini cooling system ensuring it can keep performing under the intense heat conditions the bikes are subjected to.

Overall, the ability to prevent jerking and loss of speed or control of the bike during gear changes is the main reason this transmission is needed at this level of racing.

It means gear changes while under brakes, leaning and under hard acceleration are less likely to de-stabilize the bike and cause an issue for the rider.

Of course, this is all in the name of the important fastest time, taking first on the podium and taking the coveted MotoGP championship so anything that helps towards accumulating points is important to the teams.