A Female Perspective on the F1 Grid Girls’ Ban 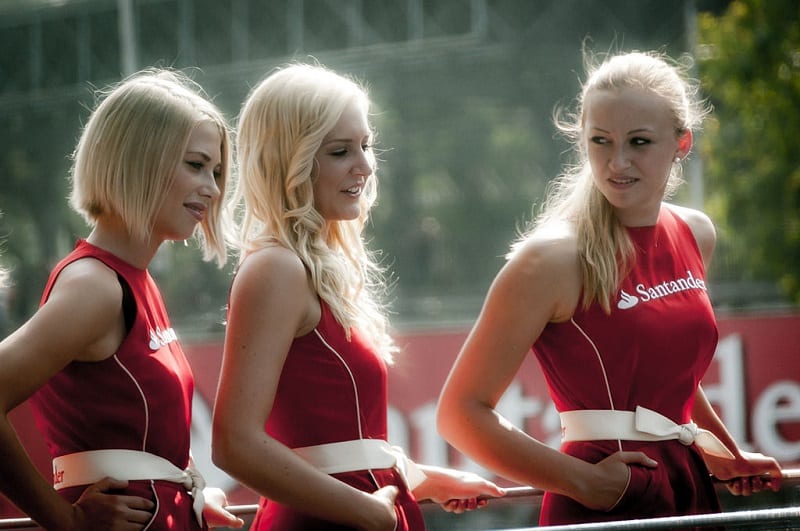 Any motorsport fan has heard about the banning of Grid Girls in F1.

It’s clear the decision has created a massive backlash from fans and teams alike.

Most countries simply decided to ignore it and go ahead with Grid Girls regardless of Liberty Media’s ban.

There are now doubts about the future of Grid Girls and the like at any number of events around the world.

Lucky for MotoGP fans Dorna have, for now, made no such move to ban Grid Girls, with many in MotoGP saying it is political correctness gone mad.

“If we were to follow this, we would have no wives or girlfriends on the grid, who would hold the umbrellas?”

As I read about this issue one thing was clear: too many people are misinformed and offended by pretty much anything. I couldn’t read another article ridiculing these gorgeous hard-working women.

I stopped reading why Liberty came up with such an idea to begin with or why this job in particular is so bad for women and began reading more about these amazing women.

It’s not just being paid to look pretty and have fun. It’s a tough gig and one that takes a lot of confidence and talent.

These are not vulnerable women being taken advantage of, they are strong intelligent women with great careers that reach far beyond the starting grid. 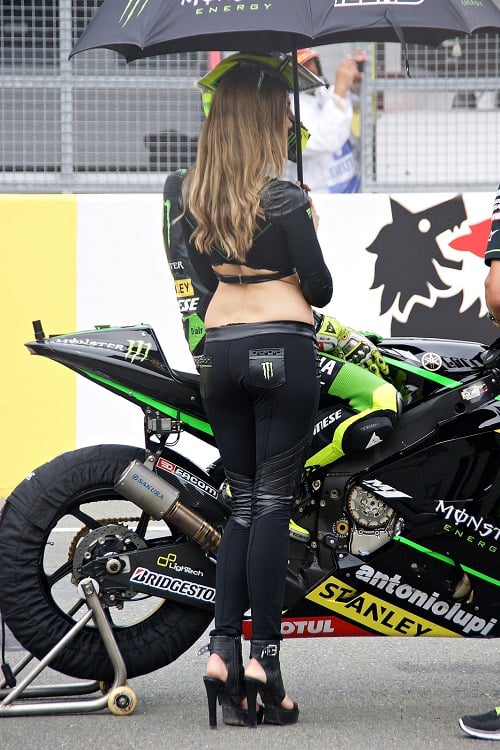 I’ve pretty much admired Grid Girls since I was a kid being dragged around by my parents to anything that involved cars or bikes.

I have known girls fortunate enough to be in the right place at the right time and had the opportunity to be a grid girl (happens when you have both F1 and supercars hosted in your city streets over the years) They worked damn hard.

One described her weekend to me one year and the word “ouch” came to mind many times.

If you’ve ever walked in stilettos for about twelve hours you’ll know what I mean.

I know many think it’s nothing – you get paid to look pretty in hot pants or similar attire. But its hard walking around all day regardless of weather photo ready and looking like you are having the time of your life while you do it.

They also serve a function. A Grid Girl is there to tell the rider or driver where to go on the grid in the organised chaos that is racing. 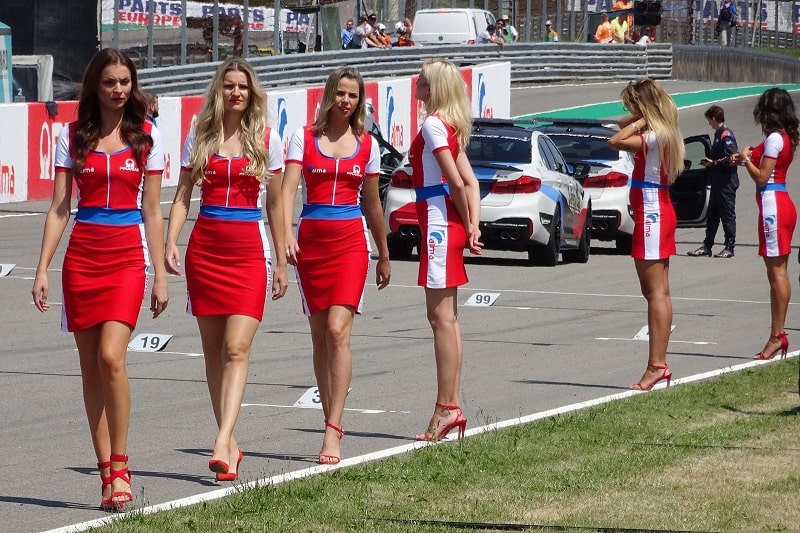 As an ambassador to the sponsor they are to showcase a product and engage with the fans. Signing autographs and giving fans photo opportunities comes into play too.

It supports an industry

A quick google search will bring up a host of agencies that specialise in providing promotional models specifically to motorsports. Some go wider and provide to other sports such as UFC, Boxing, Darts (however they have also banned walk-on girls 4 days prior to F1 announcing their ban).

One such agency, Umbrella Girls USA, specifically caters to the USA motorsport events with more than 600 girls represented nationwide.

One must question a decision said to be supporting women’s’ rights and opportunities which in fact will destroy many businesses and remove opportunities greatly effecting the profitability of motorsport, not to mention the impact on the women losing their jobs. Not just the Girls themselves but all those employed behind the scenes.

For the love of the sport

Is it so hard to believe some girls love motorsports for the love of the sport?

Millions of girls dream of being a model and this is just one of the many ways they can launch that career.

Millions of us also love motorcycles, cars and sport.

Here are just a few women who have combined their love of both to build some pretty stellar careers.

Milena Koerner at 13 would wait by the paddock gate until a security guard let her in and started a love affair with MotoGP that has seen her become the first female Team Manager. 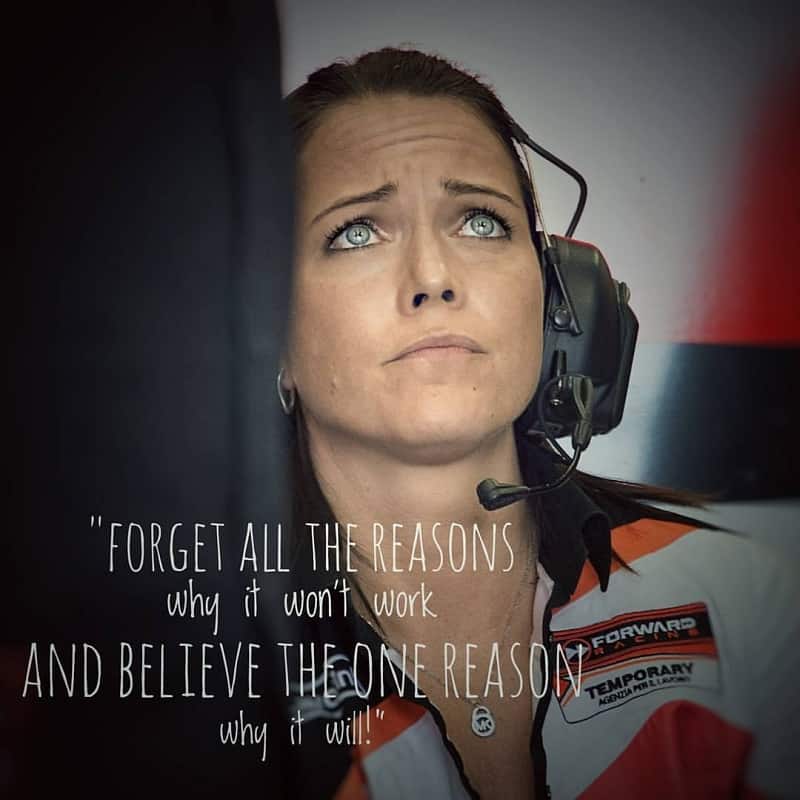 Milena used her opportunity as a Grid Girl to launch what has become a record-breaking career.

Among other roles Milena became a press manager for Team Tech3 in MotoGP before being offered the role of Team Manager for Moto2 Team Forward Racing. While many may have doubted her knowledge in the beginning she is proving herself a woman of much worth in the garage.

In May 2022 Milena was hired by Fantic Motor (one of the largest motorcycle manufacturers in Italy) to be their racing coordinator as the company plan to join Moto2 in 2023.

Amy Dargan, a reporter for Dorna, began her career also as a Grid Girl while putting herself through journalism school.

While working trackside she was given her first chance as a reporter. It is a similar story with many grid girls who use it as a chance to make an above average income while studying. No one is forcing them to take on this role and this is where one must question if it is just taking away the choice from women.

This is the opinion voiced by Scott Reddings’ ex and former Grid Girl Penny Sturgess who questions what has happened to freedom of choice, commenting she is saddened to see her friends lose their jobs and to see women around the world not have the opportunities she had.

Melissa James who was a grid girl for F1 is publicly disappointed in the banning of Grid Girls telling CNN Sport:

“I absolutely loved it. You want me to wear a super comfortable outfit and go to the VIP areas and watch what I was already going to pay to watch? Yeah, that’s fine by me. It was a dream job.”

I happen to agree.

Melissa James also highlights how disappointing it is to have worked so hard to have this amazing career only to wake up one day and find its just ripped away and ridiculed.

Laureen Vickers is another who at one time was one of the most well-known Grid Girls in the paddock.

After a successful career in modelling the opportunity to combine it with her love of motorcycles came along.

Later she was named Italia ‘Playmate of the Year’ in 2010, in 2012 she married MotoGP rider Randy de Puniet. Lauren is now divorced from Randy and runs a successful clothing business from Sydney. She stated in a recent article for the Daily Telegraph:

“I feel bad, a lot of these girls have the opportunity to travel the world and build their career. It’s a hard life sometimes, but it’s amazing. If it’s ever seen in a vulgar light, that’s up to the people photographing it or the fans.”

It has been made clear that the riders would be extremely unhappy with a similar decision to ban Grid Girls and one can certainly understand why.

In so many cases grid girls and girlfriends are one and the same. Providing the opportunity for these guys to have their wife share their crazy and busy life in a practical way.

Eugene Laverty met his wife Pippa Morsen when she was a Grid Girl, as did Alvaro Bautista who married Grid Girl Grace Barroso.

Other times it works the other way such as with Casey Stoner and his wife Adrianna who became his Grid Girl after they met in Phillip island and began dating. 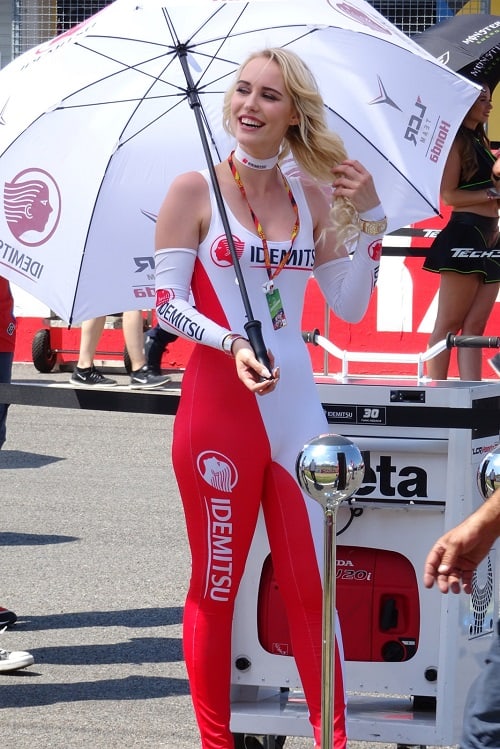 As a woman I feel for these girls who have woken up to find they have lost their jobs. I was recently asked how I would feel if my daughter wanted to be a Grid Girl…my answer go for it! I’d be incredibly proud of them as it takes guts and determination to stand out there!

They help to sell an experience and it’s really easy if it’s not an experience you are interested in – don’t watch. No one is forcing you to watch.

Just as no one is forcing these young women into anything.

I can only say this – expect to see more women on the unemployment line and less women in motorsport.

I can only hope it stops here before any further damage is done to our amazing motorsport events.

“This (ban) is a discrimination against women – In my opinion, the Grid Girls offended no one,”