The 10 Most Scintillating Corners of F1 – Part Two

The time has come for me to name my top five corners in F1.

Before I do so I want to highlight the fact there are so many more iconic corners that deserve a mention. The following are the corners which just missed out on being in my top ten:

My Top Five Corners in F1

Again, in traditional reverse order I start with number five on my list.

Swimming Pool is the sequence of 4 turns i.e. 13 through 16 at the Circuit de Monaco, Monte-Carlo 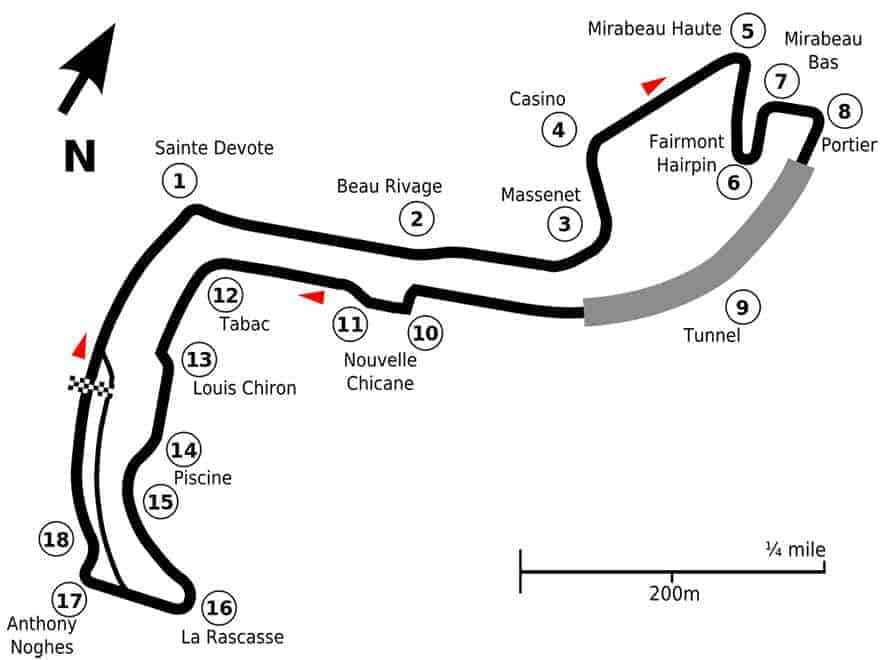 Monaco boasts a wonderful variety of brilliantly set corners and turn sequences. The track is one of the slowest and is the shortest in the Formula 1 calendar.

Named after the adjacent Stade Nautique Rainier water sports center, the famous Piscine sequence of Monaco tests the speed, braking and the agility of the Formula 1 car and driver

Cars travelling fast through Nouvelle Chicane should spot the braking zone and find the line to challenge the left corner of Turn 13 then switch immediately to right through Turn 14 before braking to pass the chicane towards the La Rascasse. 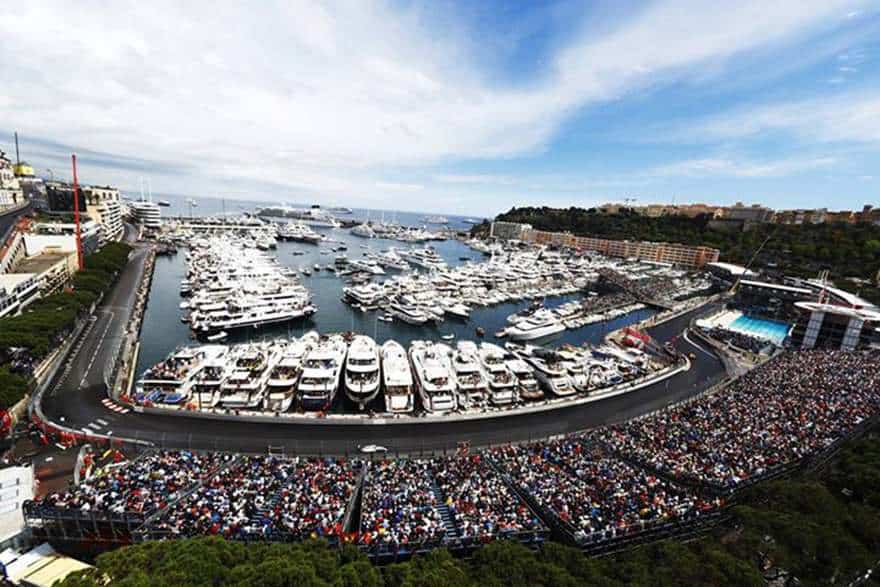 As rightly stated by many F1 supporters, seeing the car passing the swimming pool section of Monaco is the ultimate satisfaction. Cars cannot go full throttle and must remain in right gear to maintain the correct speed, avoiding the barriers and making a smooth exit.

The tiniest error and the car will definitely end up in the barrier. In Monaco the difference between perfection and barricade is close to zero. The 2011 accident of Vitaly Petrov also proves there are no room for errors in this left-right high throttle sequence.

Downhill from the Casino square lies the most famous Hairpin of Formula 1 calendar which is also one of the slowest corners.

The smaller cars of yesteryear could overtake here but modern F1 cars are too big for any overtaking manoeuvre. Cars brake and reach the minimum of 40 kmph while navigating this hairpin.

Named after the hotel across the street, it was previously known as the ‘Station’, ‘Loews’ Hairpin and more recently ‘Fairmont’ Hairpin. As this hairpin is very speed consuming teams try to change setups to navigate this corner with minimum possible time without hurting tyres.

Cars must be ready for altering direction following a short trip downhill. The driver must identify the apex with appropriate speed so as to exit the hairpin and throttle towards the fast right hander at Turn 7. 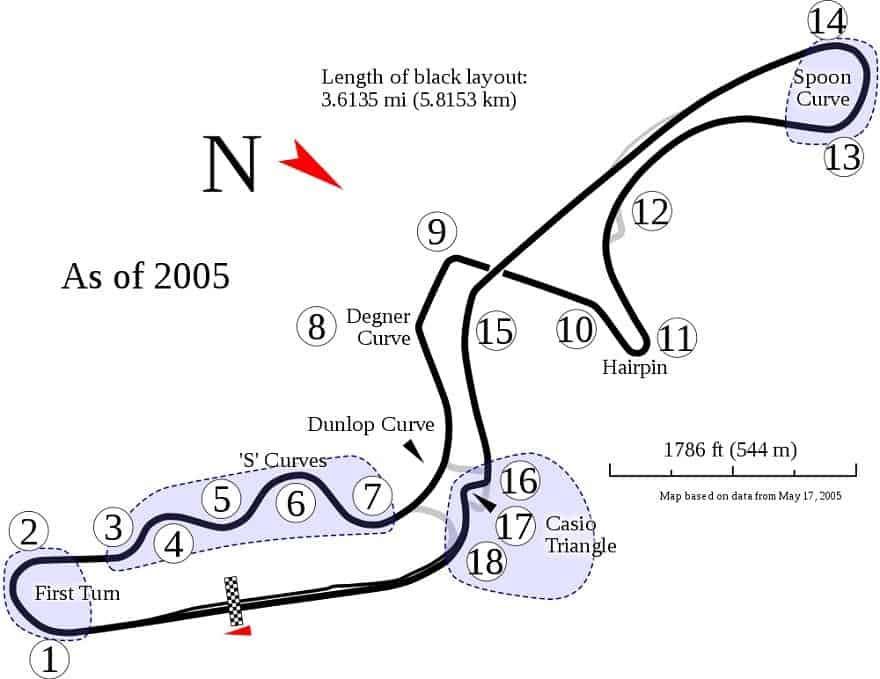 Fernando Alonso’s move on Michael Schumacher during 2005 Japanese GP was mind-boggling. Allan McNish’s accident in 2001 changed the FIA’s approach on safety of racing drivers. 130R was the spot of major MotoGP, Formula 1 and other motorsport accidents and since then there have been various changes to make it safer. 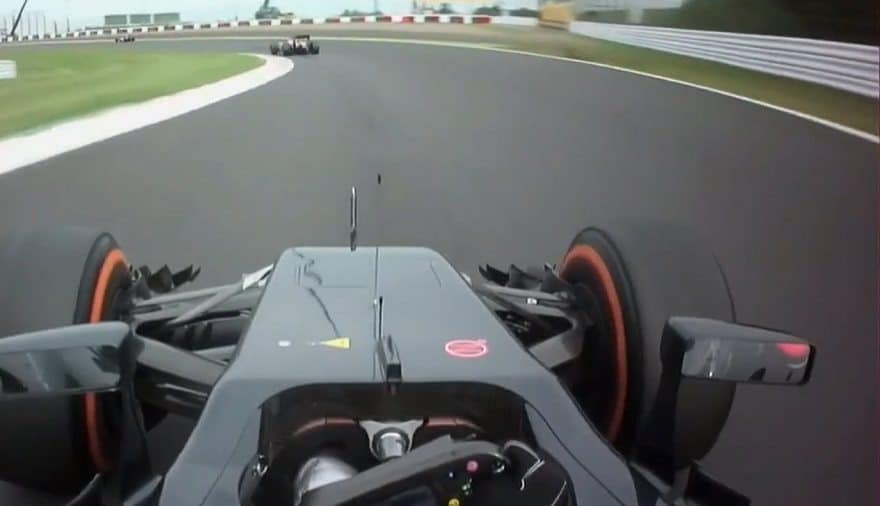 130R Suzuka from the driver’s perspective

True to its name 130R, this curve from Japan is approached at full throttle by the drivers while crossing spoon curve. The high speed corner is full of thrills as the drivers enter the corner at around 320 kmph and are still lingering around 305 kmph on the exit. Many major accidents during the early days and FIA’s safety concerns along with wider tyres and greater downforce has made this corner safer but still a major test of car and driver.

The battle of Schumacher and the then young Fernando Alonso during 2005 will remain the most memorable 130R memory but one cannot deny the grand escape of Allan McNish during 2002 Japanese GP. The corner is still one of the fastest turns of the calendar.

This year’s bigger and faster cars will be great fun to watch while they navigate this corner and the lateral G-force will be literally neck-breaking. However great the down force today’s cars produce, the high speed entry and exit of this corner should still be done courageously to reap the benefits. As driver Robert Kubica once said,” The 130R is just awesome. You’re just flat out in seventh and it bends so you are completely on the limit. It really rewards you if you get it right.” 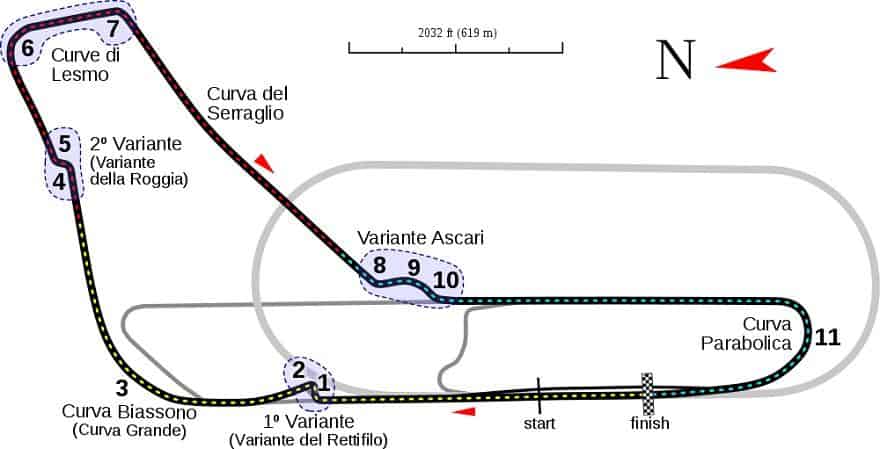 Not the famous but tragic moment when Jochen Rindt was fatally injured on his car.

The most famous curve of Monza, La Pista Magica, Parabolica is a very high speed right hander which is so long it feels like it never ends. The high speed straight leads to the Curva Parabolica ,taking the driver to the start-finish straight immediately after the curve. 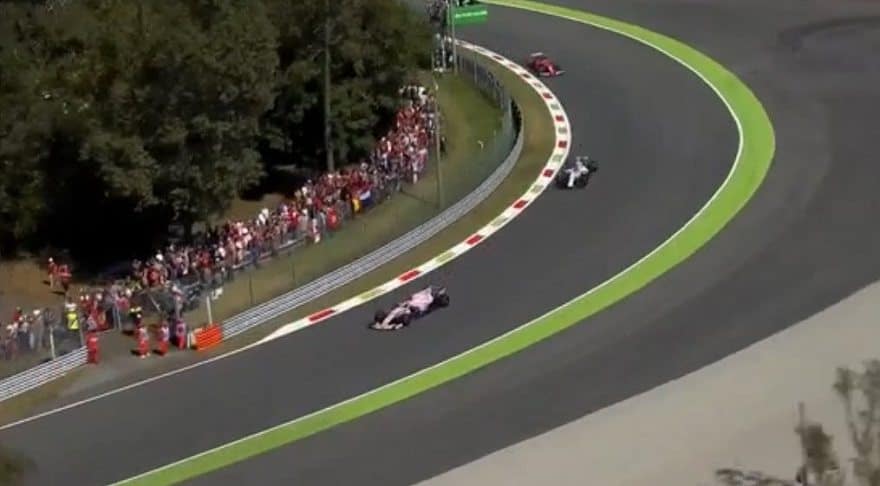 The most famous Italian corner of Parabolica gets its name after the geometry term Parabola which is the path of the projectile under the influence of gravity. Monza’s Curva Parabolica, is an increasing radius, long right-hand turn. Getting the exit is very important for managing a great flying lap or to line up for overtaking or maintaining speed.

Cars when approaching the corner are travelling at speed of more than 320 kmph. The demanding nature of the curve asks drivers to find the apex and exit the curve while still exceeding the 220 kmph mark on their speed displays. The drivers must push themselves to the limit as a messed up entry might mean running wide ruining the lap time. The heavy braking nature of this curve creates a massive 5G lateral G-force on drivers.

The safety measures of the FIA has resulted in the addition of tarmac on the run-off area, which has resulted in huge disappointment from the fans worldwide. However, the hairpin still is one of the most demanding curves of the F1 calendar. A driver’s commitment to run as wide as possible to find the right line onto the main straight often causes the driver to oversteer into the tarmac. With the added run-off place, drivers do not degrade their tyres so much but they can definitely lose a huge chunk of lap time so perfect navigation of the corner is imperative.

This year, Hamilton’s fastest lap in Free Practice 2 comprised of almost 6.5 seconds at the Parabolica with almost 5G of G-force. This zone is not the famous overtaking zone but it leads to the main straight and first chicane which saw many overtaking manoeuvres this year. The sad venue where Jochen Rindt passed way in his Lotus also saw the devastating Derek Warwick accident in 1990. 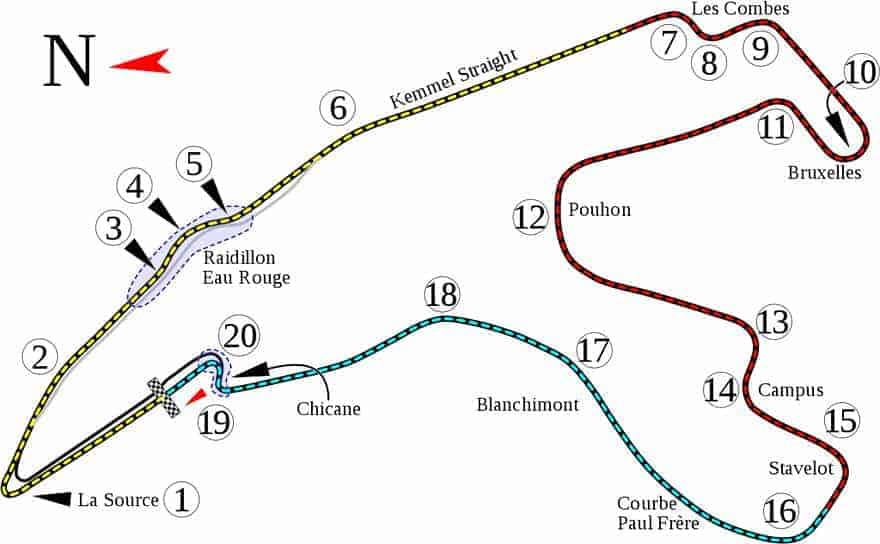 With beautiful Ardennes countryside on one side and paddock on the other, this is one corner which has always been on the calendar. High speed, left-right, uphill and downhill this corner has absolutely everything.

That famous Mark Webber pass on Fernando Alonso during 2011 Belgian GP was an absolutely spectacular event. Webber went wheel to wheel with Fernando Alonso, and passed him right into the exit of Turn 3 before climbing uphill.

Very fast Turn 3, 4 and 5 sequence of Spa is undoubtedly the most famous F1 corner. Although the FIA’s commitment to safety after major accidents of Alex Zanardi, Jacques Villeneuve and Ricardo Zonta during the 1990s has made Eau Rouge less dangerous, it still remains one hell of a challenge for the drivers.

A rapid altitude gain of around 40 meters with left-right-left sequence makes the drivers fight against 4.4G.

The summit is blind which is followed by the long Kemmel Straight.

This year’s bigger and wider cars were flat out on this complex reducing the dangers of slipping and hitting the barricade thanks to higher grip and greater downforce but it would be foolish to think a driver’s bravery is not required anymore.

Martin Brundle once said, “You had better hold onto your heart in Eau Rouge, otherwise it will come out of your throat.”

And I think that Mark Webber pass on Fernando Alonso during 2011 Belgian GP is testimony to the challenge that Eau Rouge presents. This video on Youtube is worth watching if you have not seen the overtake before.

Eau Rouge means “Red water” and the place got its name after the stream which sprinkles red water. Safety concerns have slightly reduced the difficulty of this sequence but for its elevated G force, fast turns and sudden change of altitude this corner will always be the most challenging in F1.