These are the 10 Ways in Which F1 is Better than MotoGP!

It seems I’ve been set a hard task for my return to IntentsGP!

I have been asked to respond to Angela’s excellent article claiming that MotoGP is better than F1. While a fan of both, it’s always been 4-wheels for me, so here goes!

1: It Takes Serious Balls to Win in F1

MotoGP riders are brave – indeed, among the bravest sportsmen of all – but then, so are F1 drivers.

The modern F1 car can hit more than 220mph and when that’s side by side with another car, you’ve got to be seriously committed.

Granted, an F1 driver has a monocoque in which they sit, cocooning them effectively in the event of an impact, but no racing car is ever 100% safe.

Any accident at speeds such as those carries a great deal of risk.

Is the risk higher in F1 than in MotoGP?

That depends what you are thinking about; if a car overturns, for example, the driver will have trouble getting out. On bike, that’s not a problem.

It’s unlikely in this day and age of super-safe F1 cars – and they are safer than ever – but it’s still there. 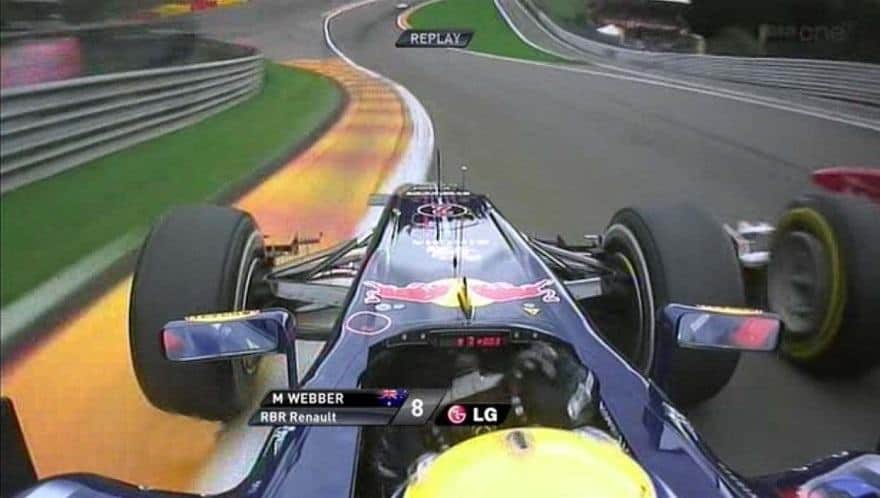 Mark Webber’s 170 mph overtake of Fenando Alonso at Eau Rouge in the Belgian Grand Prix is a wonderful example.

The point of all this? When you watch F1, you are watching the bravest of the brave, modern-day warriors taming unwieldy, supremely powerful beasts, all the while knowing there’s always that element of danger around the corner.

The current breed of F1 engine is a mighty one.

These engines are not just engineering masterpieces, they are a demonstration of what can be done with modern technology.

A 1.6-litre V6 engine coupled with complex and highly effective energy storage and regeneration systems makes these the most advanced engines in the world right now – and also a working Research and Development centre for future road car technology. 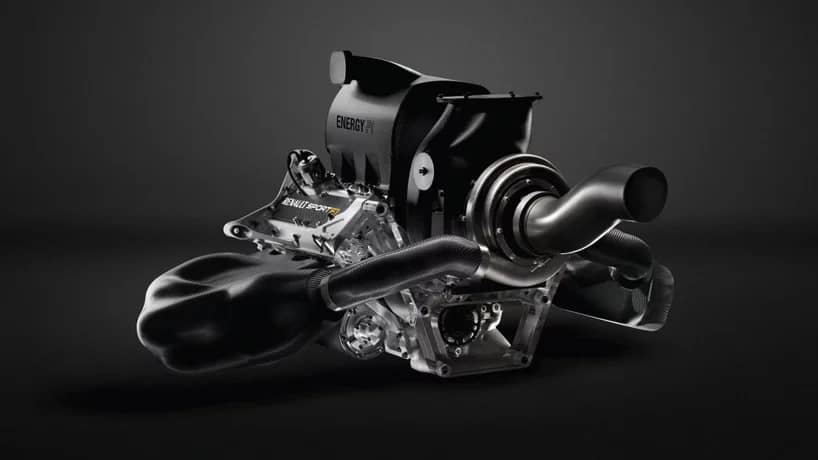 Of course, many fans miss the sheer brutality of the noise of the previous engines, but the hybrid is what 21st century automobile engineering is all about.

Remember, that’s from a 1.6-litre engine, a similar size to your average family hatchback which probably provides around 110-120 bhp.

That’s down entirely to the wealth of top-level engineering talent that works behind the scenes in F1, searching continually for more power, more torque, greater reliability and new innovations.

Does MotoGP give so much back to the world of production bikes?

For too long, F1 had been stuck in the past when it came to social media and fan-friendly events.

That was all down to Bernie Ecclestone – a great man without whom the sport would not be where it is today, but one firmly set in stone when it comes to his ideas.

Now with Liberty Media having taken over the reins, a more forward-thinking F1 is beginning to emerge.

Installing ex F1 team principal Ross Brawn as Managing Director of Motorsports was a very astute move; he’s the man for the job, as few have more passion for racing. 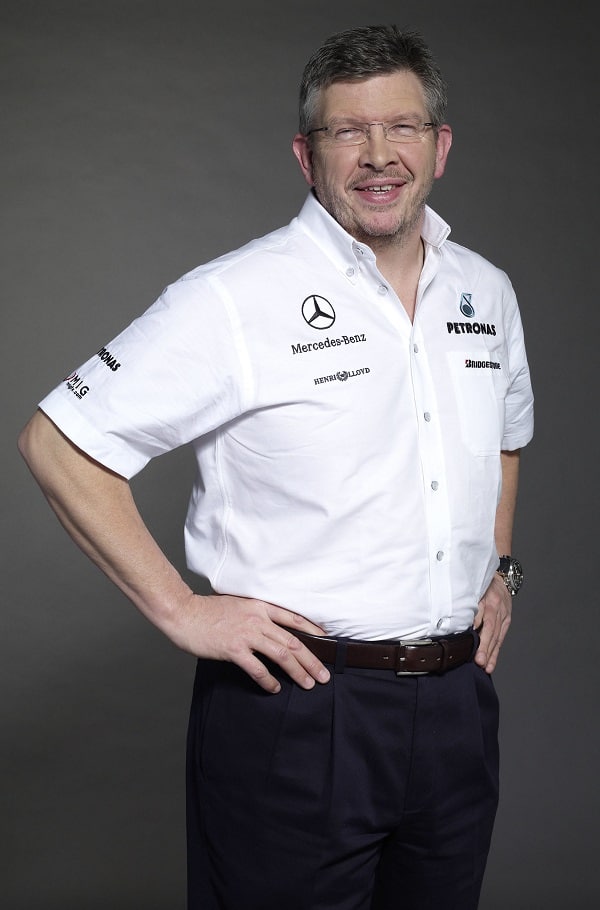 The advent of F1TV – a Liberty and FIA led online streaming app that allows for many different viewer options – and fan events such as the London appearance of cars old and new to masses of excited viewers would have been unheard of in the Ecclestone days.

This is all important as, on the downside, viewing figures are falling.

Not because the sport is not exciting – although some may rue the dominance of Mercedes-Benz in recent years – but because of the widespread move to pay-per-view television.

It is to be hoped that Liberty has its thinking cap on, and changes are afoot.

MotoGP has its stars, without a doubt.

In motorsport in general, for example, Valentino Rossi will always be hailed as an all-time great.

But F1 has stars who shine brighter, and who continue to draw in the crowds.

Every F1 race you watch right now, you know you are watching one of the Greatest of All Time: Lewis Hamilton.

He is undoubtedly one of the finest racing driver’s the world has ever seen and it’s a privilege to be watching him in his prime. 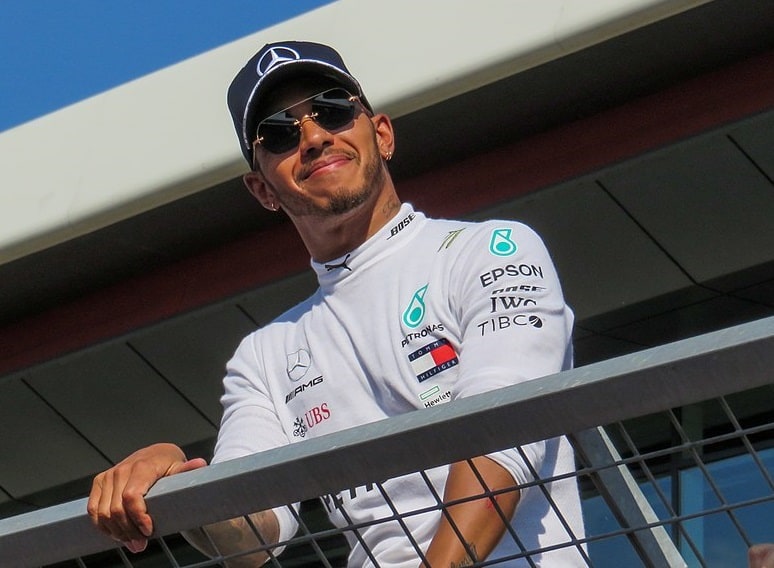 Sebastian Vettel may not have the media presence that Hamilton has – and that’s his own choice – but he is still a star and a four-time World Champion.

Few categories in any sport give you the chance to watch so many greats at once as F1 does.

For this writer, one of the major reasons that F1 towers about MotoGP right now is the sheer wealth of top talent coming through the ranks.

Last year saw a rash of new rookie drivers – three of them British – who are from the top drawer.

Lando Norris had an excellent debut year in the improving McLaren, Alex Albon was slotted into the Red Bull mid-season and impressed from then on, and George Russell displayed astonishing professionalism – not to mention generous amounts of talent – in the back of the grid Williams.

Also making his mark was young Charles Leclerc, who appears to have forced his way to the apparent ‘number 1’ spot at Ferrari. 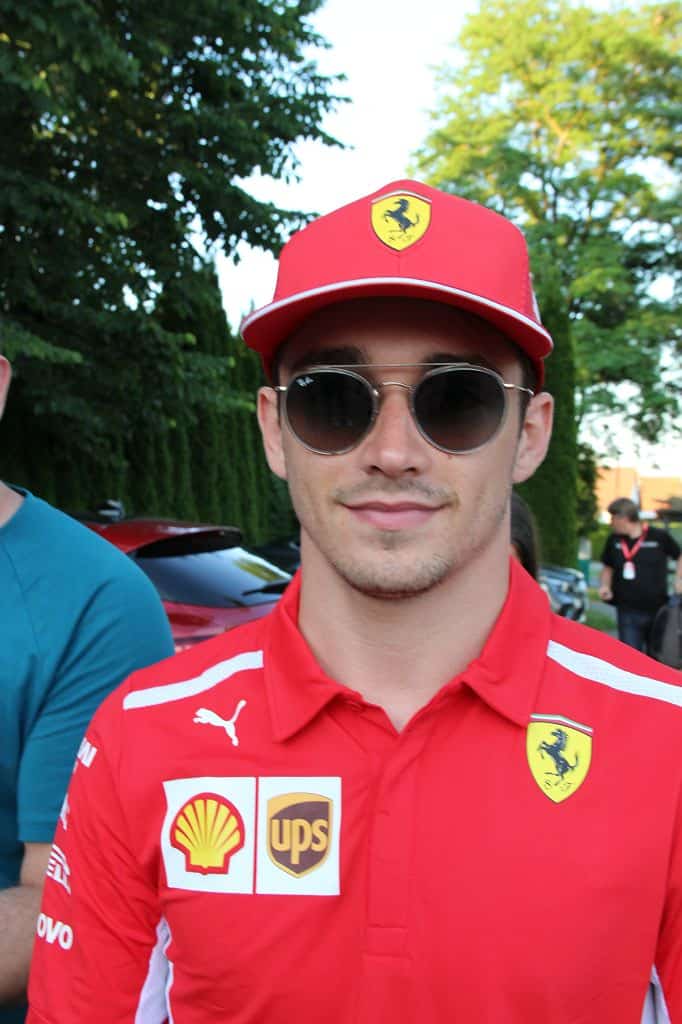 Consider this: established superstar Max Verstappen is still only 22!

Watching young talent develop is a feature of F1 that gives it something extra.

This year – 2020 – Nicolas Latifi joins Williams from F2, and watch out for a young talent from Estonia, 19 year-old Juri Vips, who will be racing in Japan this year under the Red Bull banner. I expect to see him in F1 in 2021.

F1 history is littered with great names, and not just drivers.

F1, after all, has Ferrari! One of the most famous brands in the world, few come with the history and associated legends that Ferrari brings to the table and that’s one reason why the powers that be like to keep the Prancing Horse happy.

There is no doubt that, for a lot of fans, F1 simply is Ferrari. It’s the only team that has been there from the very start of the World Championship – in 1950 – and believe it or not, F1 is Ferrari’s sole advertising venture. 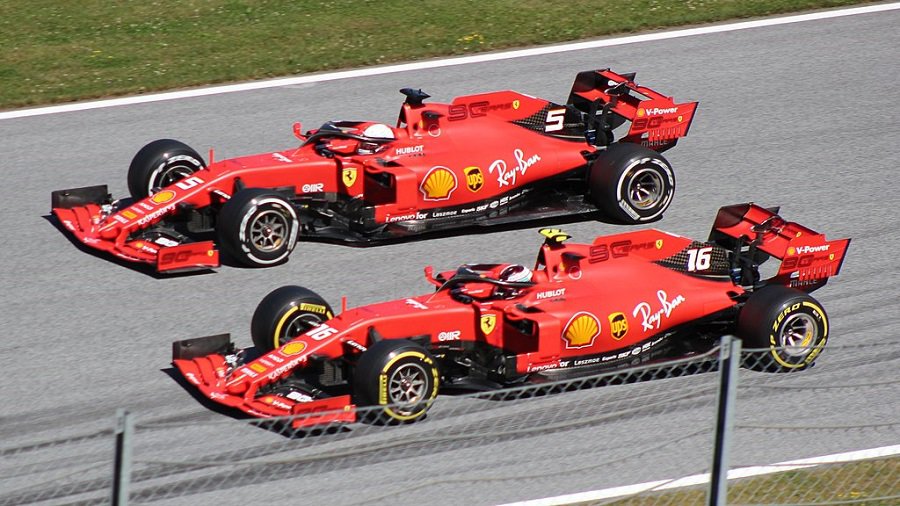 It does not need to advertise otherwise.

Mercedes-Benz also has a rich history in F1; the original ‘Silver Arrows’ were pre-WWII machines that took technology to another level – just as Mercedes has done of late.

And where would Red Bull be without the power of F1?

It’s arguably made the brand as famous as it is right now.

Honda, another great name, also has a strong presence and that’s before we come to two of the most iconic brands in F1 – McLaren and Williams.

These two British teams epitomise what F1 is about – racing, and that’s it.

Take a look at the MotoGP calendar for 2020.

A handful of circuits are shared with F1, but the overall look is hardly one of iconic, world-famous racing circuits.

What has MotoGP got, for example, to match the sheer nostalgia, passion and fever that is aroused by the Monaco Grand Prix? 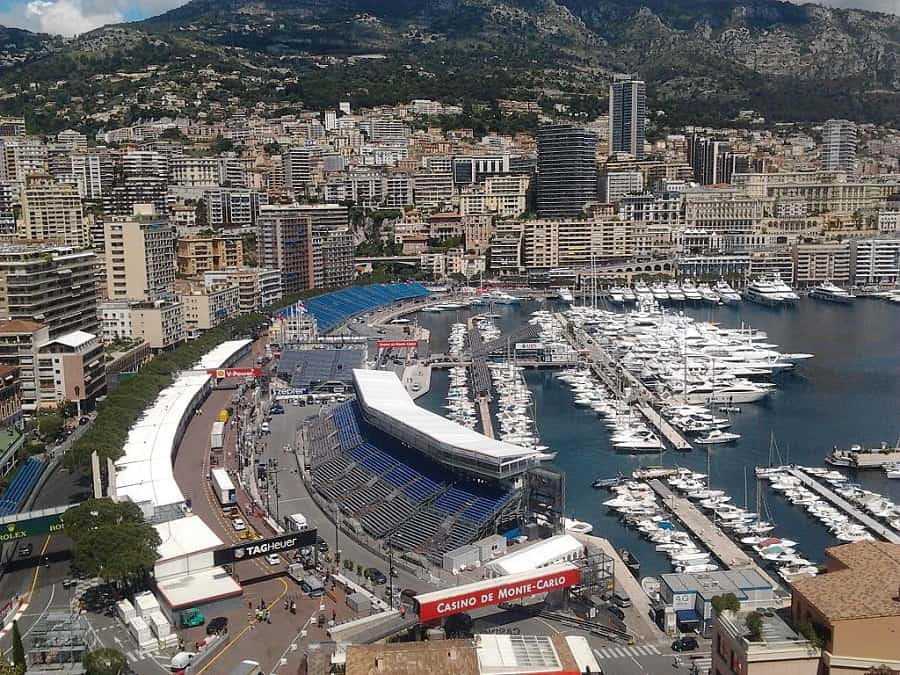 There’s nothing to match it!

MotoGP goes to Mugello and Misano in Italy.

F1 heads to the Cathedral of Italian Motorsport, in the Royal Park at Monza, a place where the Tifosi worship their Ferraris like nowhere else.

Plus, there’s Spa Francorchamps – one of the most utterly majestic circuits in the world – and the amazing Suzuka, for an always sold-out Japanese Grand Prix, and this year, the circus revisits the coastal circuit of Zandvoort in the Netherlands, scene of many an excellent race in years gone by.

When it comes to circuits, MotoGP can’t get close to F1.

MotoGP is about close racing, overtaking, and constant, frantic yet precise racing.

That’s great, I enjoy it very much.

But…there’s something about the anticipation in F1 that continues to give me a thrill.

When you get two great drivers together, in a close duel, you know that they are not going to pass each other every other corner – although it does happen occasionally – but when that moment happens, when one of them dares to take the risk and go for it, the excitement is even greater.

Then, there are the occasions when the unexpected happens: who would have guessed at Charles Leclerc claiming more pole positions than anyone else in 2019?

It wasn’t on the cards at the start of the season! And when the young man won for the first time, even non-Ferrari fans were overjoyed; new blood always adds to the occasion.

The fact we F1 fans approach every race expecting Hamilton and Mercedes to win means we have more to look forward to when something else happens! Who knows what 2020 will bring?

I’ve mentioned Monaco: does it get more glamorous than a race in the Principality, with the trophies awarded personally by the Monaco Royals?

Where is the MotoGP equivalent?

The celebrity element may be frowned upon by some, but it’s there to give the sport more gravitas, more publicity. F1 attracts celebrities, it attracts the rich and famous, and it always has.

Motorbikes are not as much a status symbol, after all.

Let’s be honest, if anyone were to be asked to name the most famous motor racing series in the world, they’re going to answer F1.

Because, quite simply, it is the upper echelon, the pinnacle, of engineering, of driving, and of innovation, and one that will always hold that extra ounce of attraction for long-term fans such as me.

The moment when the grid clears, and when the cars roll up on the grid after the warm-up lap, and the next few seconds of anticipation – that, for me, is the beginning of a couple of hours of excitement. 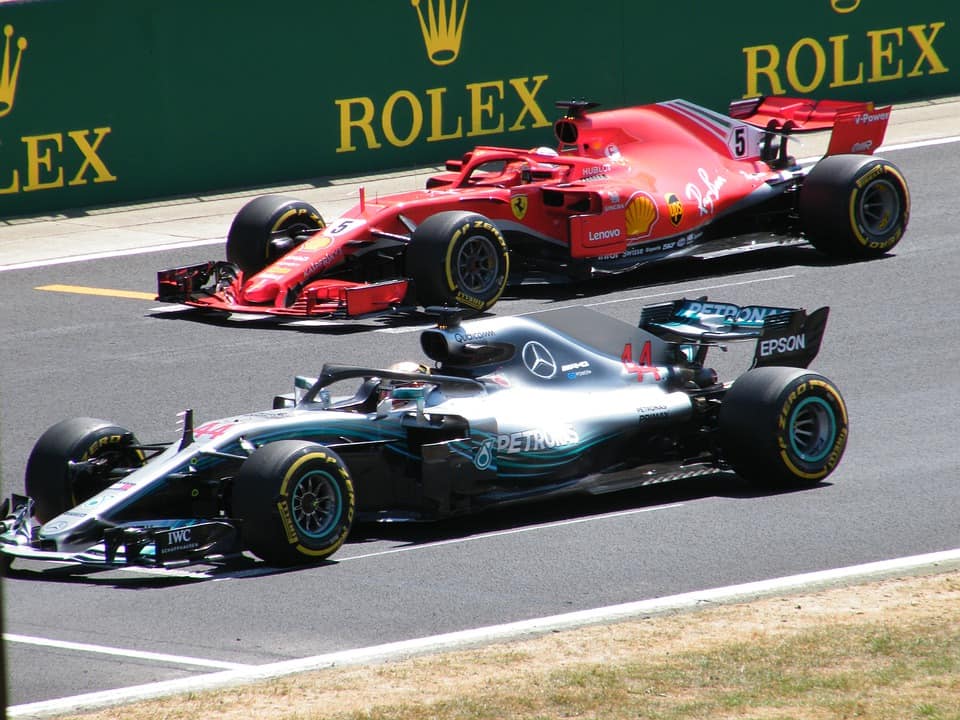 Of course, not every race is thrilling – some are anything but – yet it’s still Formula One, and it’s still the best for me.

Before I go, I’ll let you into a little secret: these days, you’re more likely to find me watching the Grand Prix on the TV in the clubhouse at Cadwell Park, while cars or bikes go about their business on the track just outside.

That’s what the best Sundays are made of!