On race weekend the paddocks are overflowing with people.

Who are they and what do they do?

From cooks to mechanics, there is more to a MotoGP team than meets the eye and many people come together to put a rider on the grid race after race.

What does a MotoGP team consist of?

This varies with the teams but clearly a major factory team like Ducati or Yamaha have the funds to staff a pretty amazing team box as opposed to a small independent with limited funding.

However, they are similar in many ways consisting of both general managers for both riders shared staff, of course personal mechanics and team chefs. Let’s look at the organisation charts of some of our favourite teams.

As you can see each rider has a team within a team they work with. In Yamaha’s case they list only 27 people including the riders. 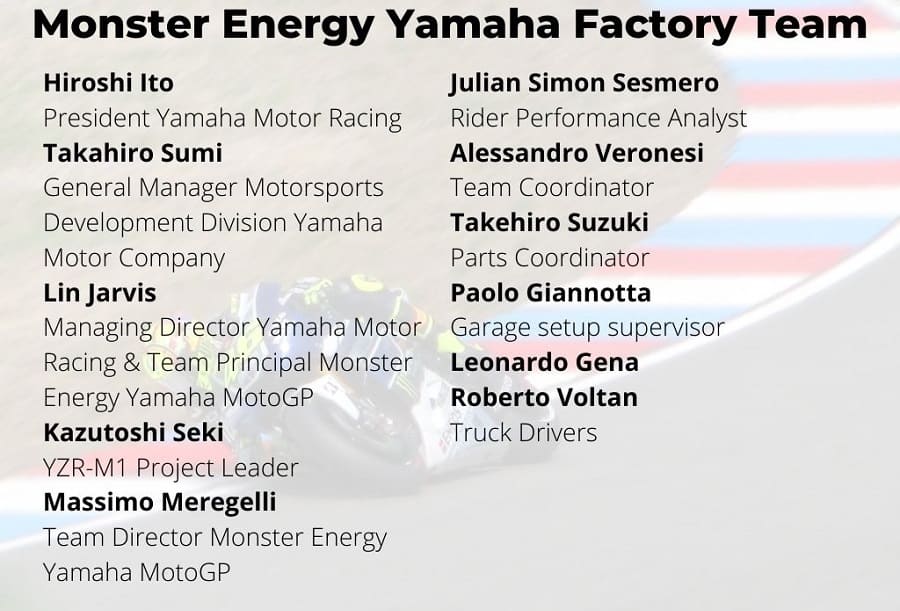 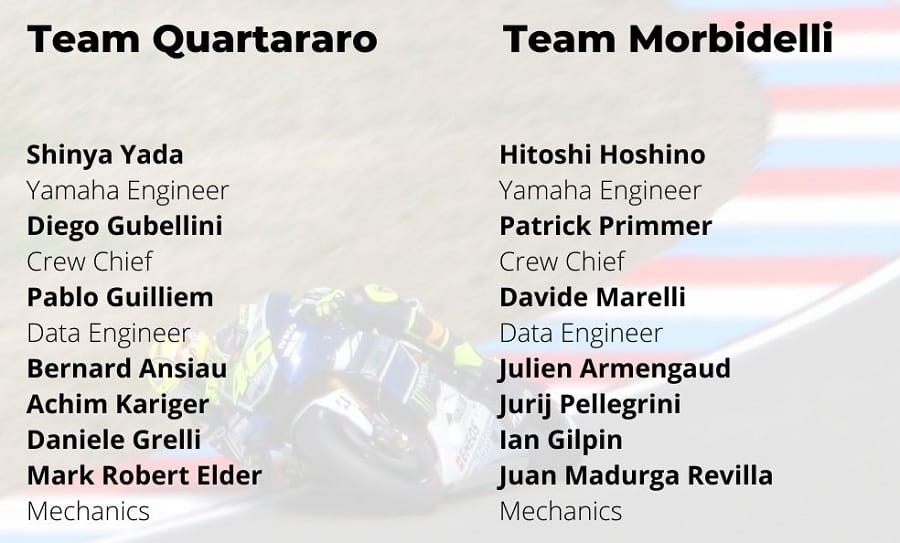 Ducati are a little larger with 34 team members in total including their riders. Granted Yamaha do not list their hospitality staff as part of their team so one can assume the numbers are in fact higher for them too. 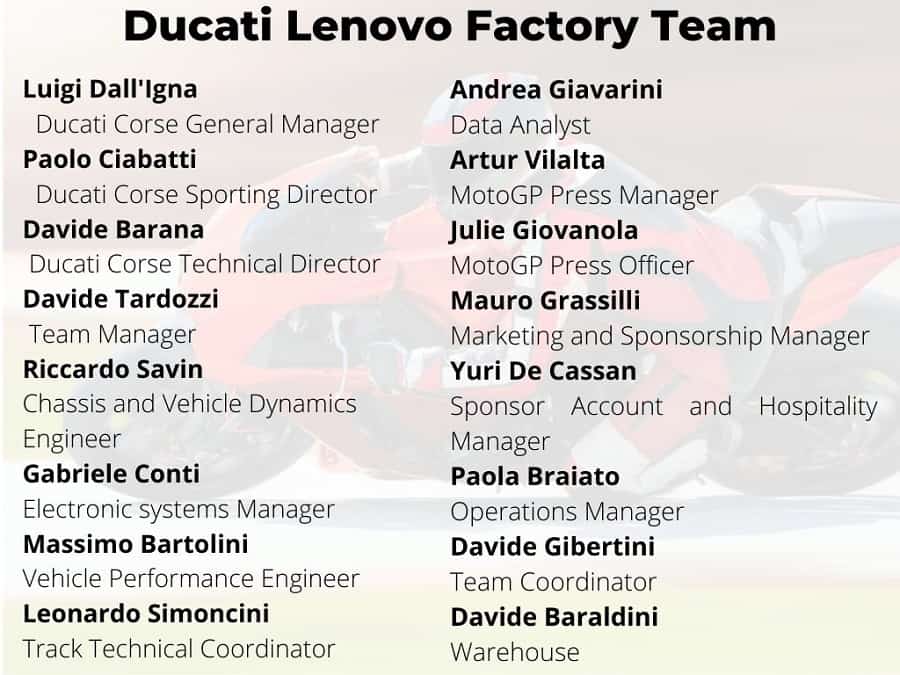 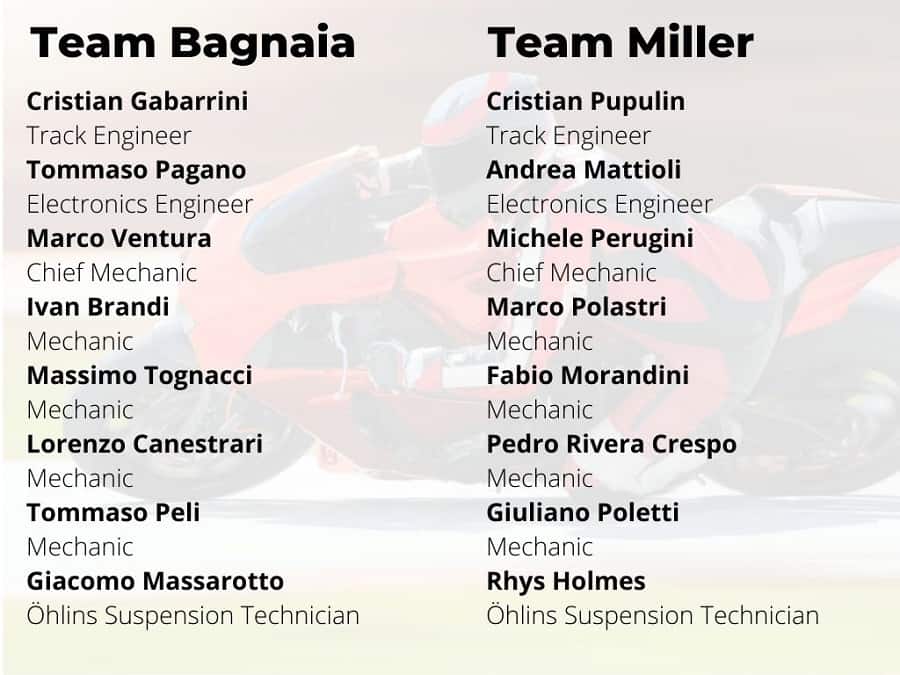 Each team also has a test team consisting of a test rider and test team.

For Ducati the test rider is Michele Pirro, while Aprilia list tester and wild-card rider will be Lorenzo Savadori.

In addition to these team members, consultants are also called in to ensure the best possible performance from the bike on race day since each track requires adjustments and different setups. No one person can possibly bring all the knowledge, data and skills to the table.

When we are talking consultant, they are at the top of their field in the motor racing world.

Generally, teams will have consultants from Brembo, Michelin, Ohlins (forks and suspension) or transmission providers Zero Shift Performance (Aprilia) to get the most from their products on the track.

It is interesting to note that Ducati have an Ohlins’ technician on staff permanently. 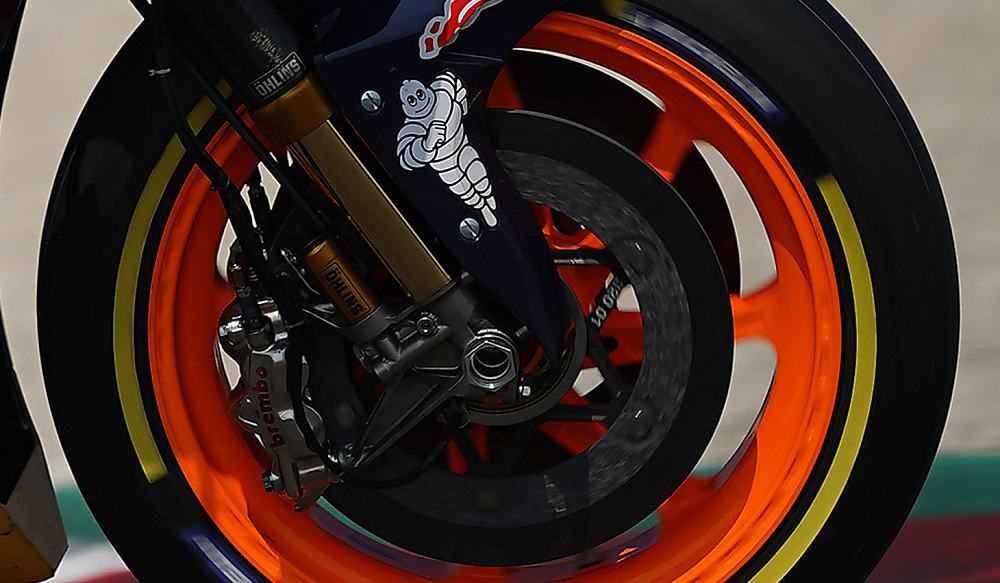 A team may bring in independent experts to get even more from their bike such as AVL who is the Official Digital Partner of the Ducati Team racing in MotoGP.

This team of analytical experts are responsible for assisting Ducati to get the most from their brakes via AI driven safety data collection and simulation.

However, with their expertise in customised mobile data and analytical applications they assist Ducati with far more than brakes such as the Spare Parts Inventory Optimisation application, which tracks all of the company’s spare parts stock items.

It assists with a single distribution point and optimises the inventory. This allows Ducati to deal with suppliers, dealers and stores across 80 countries for improved efficiency.

But there are some other companies around the world who specialise in areas impacting race day we just never see.

One such company is MRK1 Consulting. This company is the go-to consultant for Motorsport businesses and facilities and are viewed as the experts not only in management of motorsport facilities but their development from the ground up.

Forming part of the team working with Thailand and Indonesia on their place in the MotoGP calendar with Thailand joining in 2018 and Indonesia coming on board in 2020. Both facilities are in good hands with MRK1 in charge of all aspects of operations.

Not only do they manage this side but they offer management in local staffing and ongoing promotional requirements to bring the best out of every event.

They also work closely with Dromo regarding track design and track surfaces. Dromo, an Italian based firm, has been a firm fixture in motor racing since 2000 with a focus on safety.

This brings us to the track itself which require monitoring and resurfacing. Many look to expert Jarno Zaffelli from Dromo. Dromo recently worked with Tarmac to fix the disaster at Silverstone following a failed resurfacing in 2018.

Just a quick mention here, Tarmac are a UK based company with a focus on sustainable building materials and solutions. Their recent work to fix Silverstone has been commended by F1 drivers in July and the MotoGP riders in August. 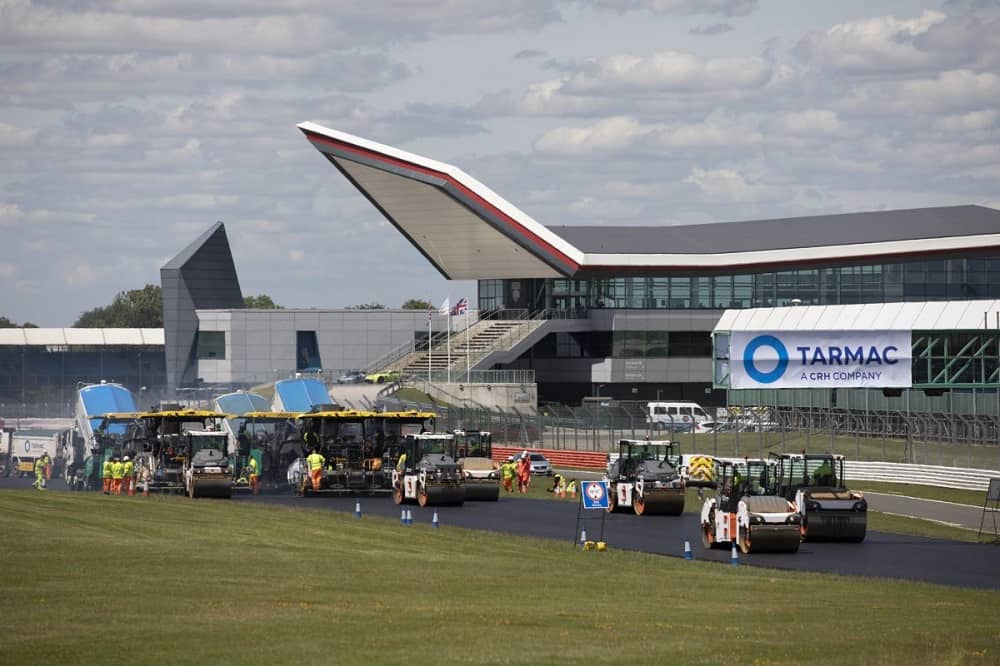 Thanks to the amazing results of the surface and the fact a new track offers grip unlike any other we had a very exciting race (especially the last corner; a real showstopper!!) Many fans immediately took to social media heralding the race a redemption after last year’s cancellation.

We saw a similar issue at the start of 2022 with the Mandalika test highlighting some serious track issues requiring quick repairs before the return of the Indonesian GP to the calendar.

Now back to Jarno Zaffelli and his team at Dromo who are responsible for managing track resurfacing at Imola, Misano, Sepang and the design of Rio de Honda in Argentina just to name a few.

In 2008 they developed the DroCas simulator which is now considered one of the best safety analysis and risk assessment systems for racetracks and the vehicles who use them. Dromo uses this data to design, change and resurface tracks for the best performance possible.

The BMW M5 safety car can be seen speeding around the track at the start of each race or if there is an incident. There are two vehicles provided by BMW called Omega 1 and Omega 2, the man in charge is Carlos Ezpeleta who drives Omega 1 on race day. 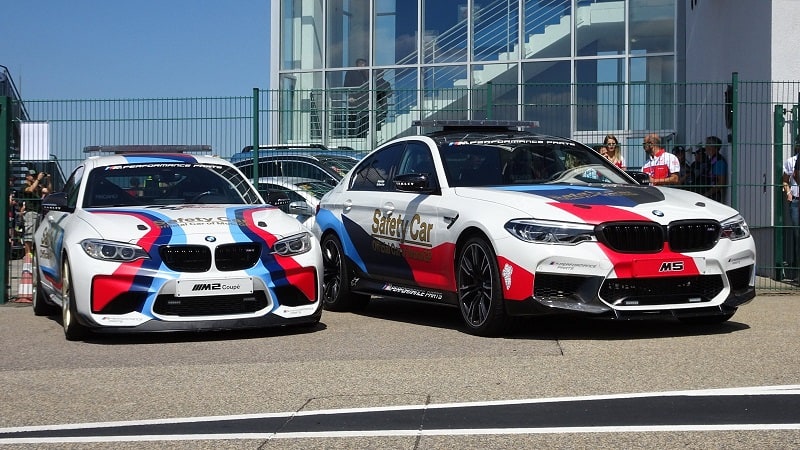 These cars are an integral part of the safety procedures when things do go wrong as they can provide fast medical assistance including defibrillators while Omega 1 keeps the other riders at the pace required until it is deemed safe to return to normal racing. There are also dedicated medical staff who travel with the MotoGP paddock including trauma nurses and doctors.

Last but certainly not least are the Marshals or Officials. At the Australian MotoGP there are over 600 race officials. They cover roles such as Flag Marshal, Recovery, Admin, the Paddocks and Communications just to name a few.

These volunteers work tirelessly to ensure the safety of both spectators and staff alike to make these events possible. The best thing about the Marshal positions is anyone with a passion for motorcycle racing can apply to become an official, getting you up close and personal with all the action of race weekend. 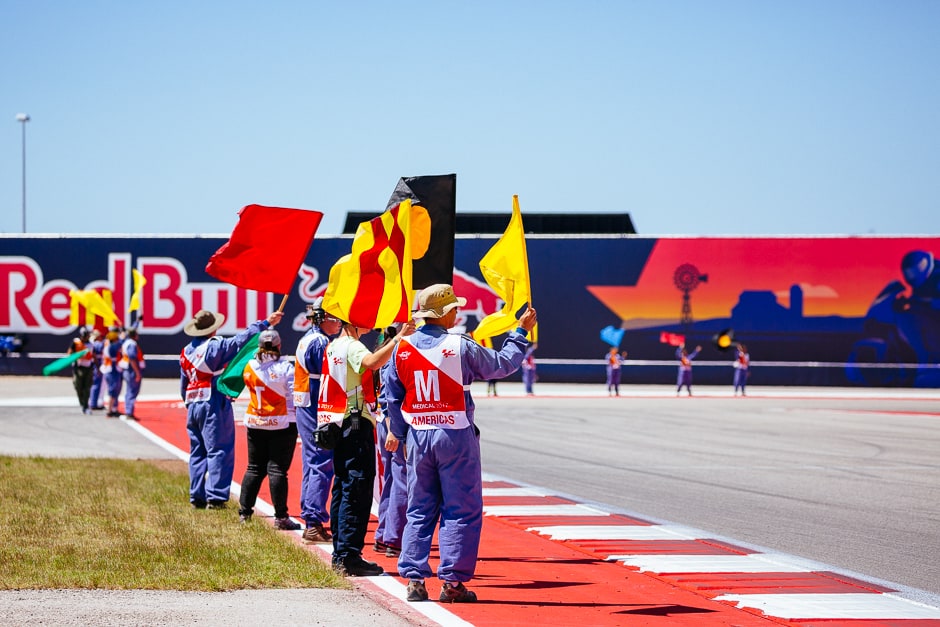 Track marshalls at the end of the 2017 COTA MotoGP. Image courtesy Texas Highways

This is only a small number of people who come together to bring us these amazing events time after time and I’m sure there are dozens more companies who bring their expertise to the table or the bike as the case may be. So a big thank you to all those supporting staff and unseen companies who make it possible for the riders to do what they do best!