Which are the Toughest MotoGP Circuits on Brakes?

Every one of the 19 rounds in the MotoGP season carries unique difficulties for the riders and teams.

Some have surface issues (COTA, Jerez). Some have erratic weather patterns (the UK and Phillip Island) and others are tough on brakes.

It is said that braking is the most important aspect of racing. No point in going full throttle at 350km/h if you can’t stop or control it.

It’s not just about being the fastest. You have to be great on the brakes.

So who do MotoGP teams turn to for braking power over the 10,000 kilometres of track covered each season with more than 10,300 braking instances?

That would be Italian brake manufacturer Brembo.

We often hear riders and commentators refer to tracks as being the most difficult. It seems they are always claiming the current track is the most demanding and they are; each for differing reasons.

Let’s take a look at a few of the ways Brembo themselves categorise the tracks.

Brembo rate each track on a scale of 1 to 5 to determine the overall stress on the brakes for each track. Some might come as a surprise. 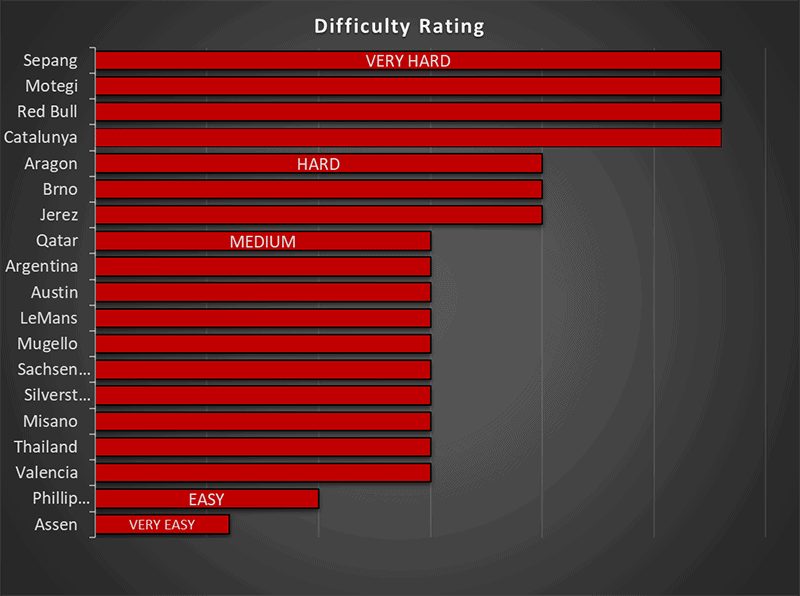 Only four of the 19 circuits receive the very hard rating of 5.

As we can see in the case of Phillip Island it is rated as easy where the stress on the brakes is concerned (with only 81 braking sections over the entire the race) but has a reputation for being very fast and tough on tyres. Or COTA (Austin) which has the most amount of turns technically and a demanding surface yet only rates as a medium stress on the brakes.

So, what exactly does Brembo consider when coming up with these ratings?

The amount of times on the brakes sounds like it could give you a good understanding of the stress level on the brakes overall for each track but it is not a very good indicator.

For example, Assen has 182 braking sections overall but is rated very easy. The easiest on the brakes out of all the rounds.

Why? How is that possible if they spend around 33% of the race on the brakes?

Due to the design of the track and the winding nature of the turns the length of time braking is less, the deceleration is less demanding and the brakes are given time to cool down. Compare this with Sepang which has only 120 braking sections but is considered very hard on the difficulty index overall. 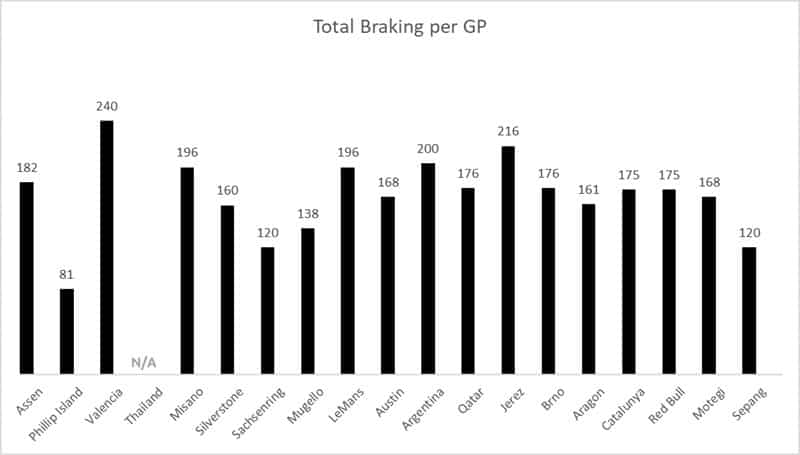 Motegi takes the title as toughest on brakes despite being out of the top ten as far as braking instances goes.

it does, however, have a braking section that requires the rider to be on the brakes for over 250 metres.

The nature of the hard corners and limited time between braking sections means the brakes are not given adequate time to cool down.

In fact, Motegi is so harsh on the brakes FIM has declared the thicker 340mm brakes must be used at this track. Riders may not decide to use the standard 320mm.

Temperature plays a big part in the analysis and includes both the track and air temperatures.

Tracks such as Jerez face issues of not only high air temperatures but even higher track temperatures leading to a chance the brakes may overheat. 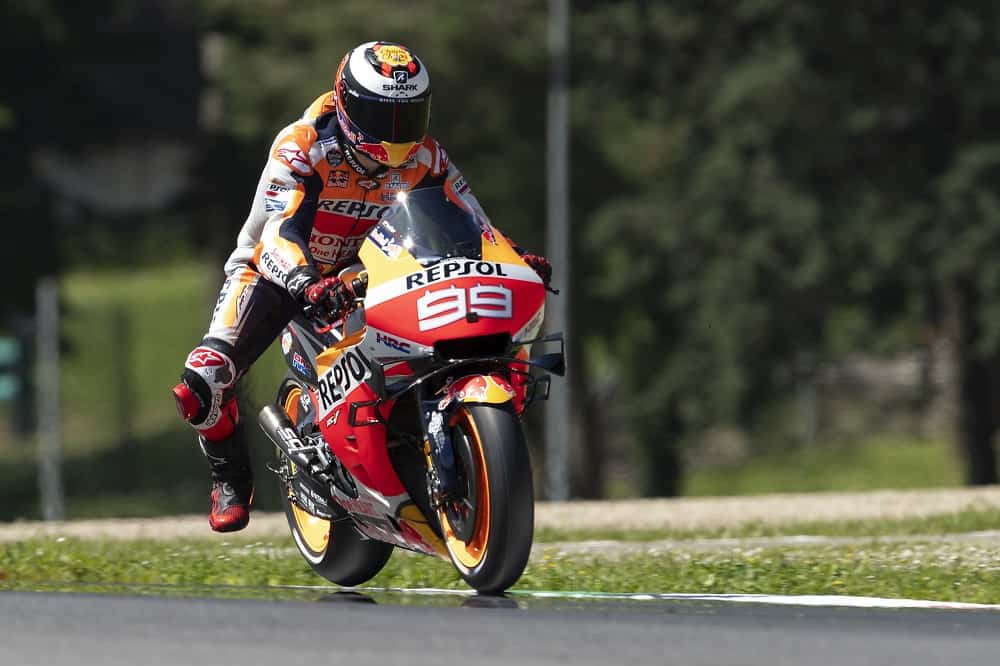 On the other hand, if it rains or the air temperature is cold, the brakes struggle to maintain their optimal temperature.

It should be noted due to advancements in technology by Brembo in the past 2 years riders have begun to ride in the rain with the carbon brakes and maintain operating temperature. See our article about MotoGP in the wet.

The amount of cornering is also an important consideration.

Not only the amount but how close they are together and how ‘hard’ the cornering is. 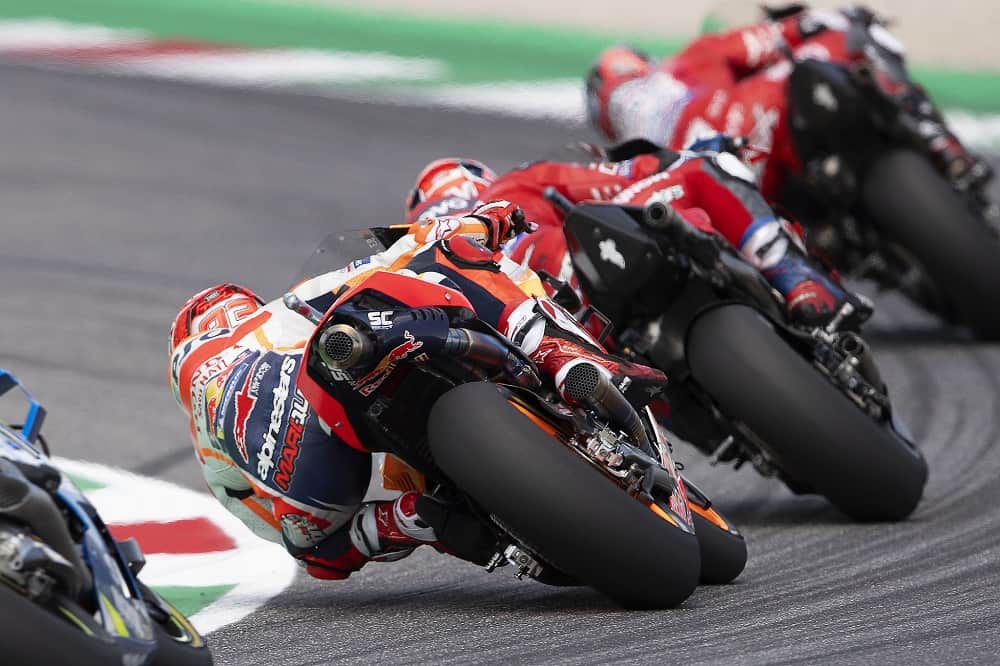 The cornering can cause temperature issues with the brakes not having time to cool down on tracks with a lot of hard cornering close together.

Add this to the temperature issues to be considered for each location, it is far more complex than first thought and explains to some extent why tracks with less cornering can still be considered harder on the brakes.

While all tracks are approximately the same lap length in terms of kilometres at a quick glance, some tracks are slightly shorter in length requiring an extra few laps to bring the total to about 110 kms per GP round.

This has a significant impact on the number of braking instances (Aragon 161 and Sepang only 120) and therefore affects the amount of stress on the brakes.

Brembo also assess the deceleration and force experienced by the rider.

The rate at which they must slow down and the space in which they have to do so is quite important to Brembo in deciding how to rate the overall stress on the brakes.

According to a report by Brembo, MotoGP riders regularly experience a force of 1.1g to 1.2g. when braking.

Which is the Toughest Circuit Overall?

Overall, Motegi comes out the toughest with its combination of most time spent braking and the greatest deceleration. 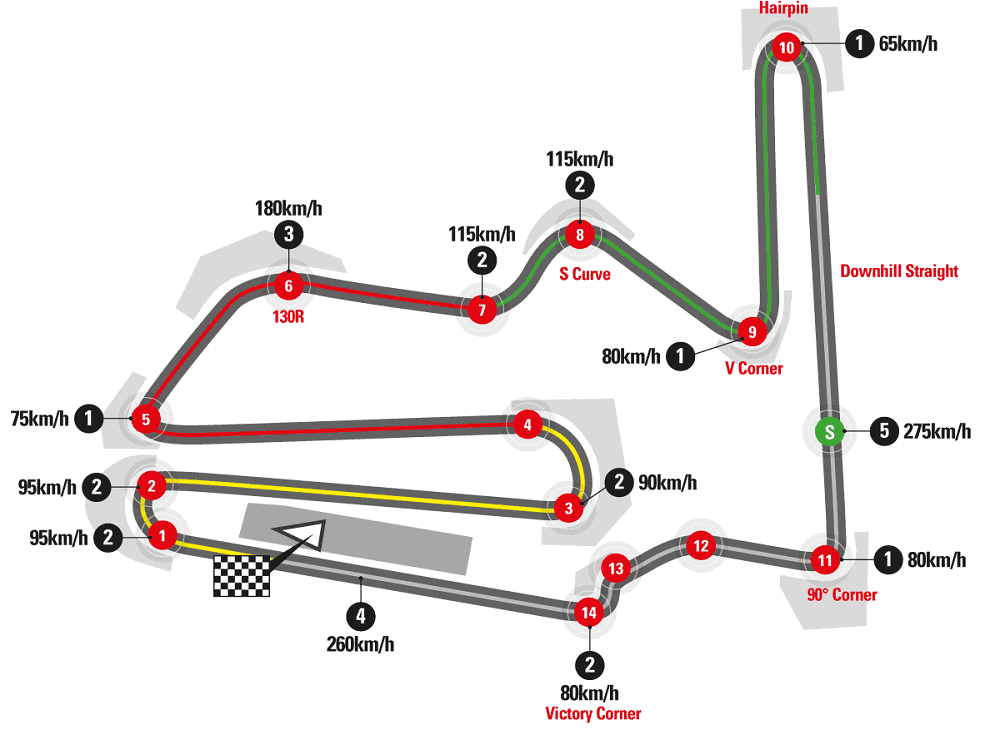 Brembo takes an enormous amount of data (more than we could ever really examine) and turn it into the preferred braking systems for the MotoGP field. Their investment in continued improvements and technology means our favourite riders are as safe as possible in Brembo’s hands.