The Trials and Tribulations of a Second Tier F1 Team – Sauber

With new beginnings this year in Formula 1, new drivers, new regulations and new challenges, it’s time to reflect and look back on the past ten years.

Specifically Sauber, a team with a long history in F1 as both part of a works team but predominantly as an independent team.

The long history of the team shows a huge determination and is a (mostly) highly respected organisation that has suffered many tough years but continues to persevere in the pursuit of greatness. 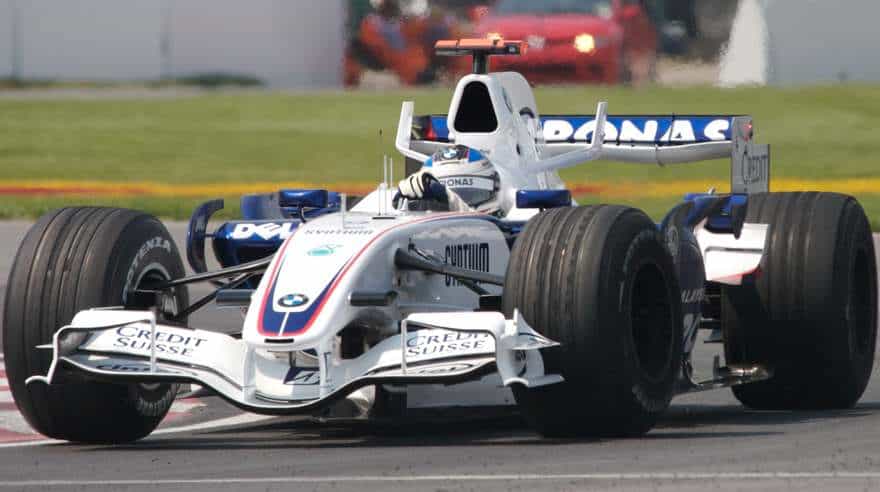 The second year of the BMW Sauber partnership, BMW bought a majority stake in the team and instant improvements to facilities translated to the racetrack and saw lots of promise from the takeover resulting in the team becoming the ‘best of the rest’ behind the dominant duo of McLaren and Ferrari hailing a daunting future for some of their rivals.

The year also saw the debut of future world champion Sebastian Vettel who got his chance behind the wheel due to a huge crash in Canada for Robert Kubica.

Vettel rose to the occasion and qualified 7th and finished a very respectable 8th becoming the youngest ever driver to score a point showing the potential of what the future world champion was capable of.

The team had their best ever performance in the constructors finishing 2nd.

With renewed confidence, the team set high goals for the 2008 season aiming for their maiden victory.

That goal seemingly wasn’t high enough as the team not only scored their first victory but it came in the form of a 1-2 with Kubica and Heidfeld showing they were not to be taken lightly.

After the win, however, the team decided to switch development on to the following year’s car which had a drastic effect on pace and saw them being outperformed by the likes of Toyota and Toro Rosso.

However, the year saw the pair take 11 podiums overall and finishing 3rd in the constructors.

After such promise of the direction the past two years was taking, BMW announced they would be leaving Formula 1 at the end of the year.

With development on the KERS system being halted, the team struggled to be anywhere near as competitive as they had been in previous years.

The team ended the season in 6th place having achieved two podium spots.

The future of the team looked very precarious needing either another team to drop out of the 2010 season or for all the teams to agree to allow them to race.

As it happened, Toyota decided to leave and Peter Sauber bought back his team seeking a fresh start. 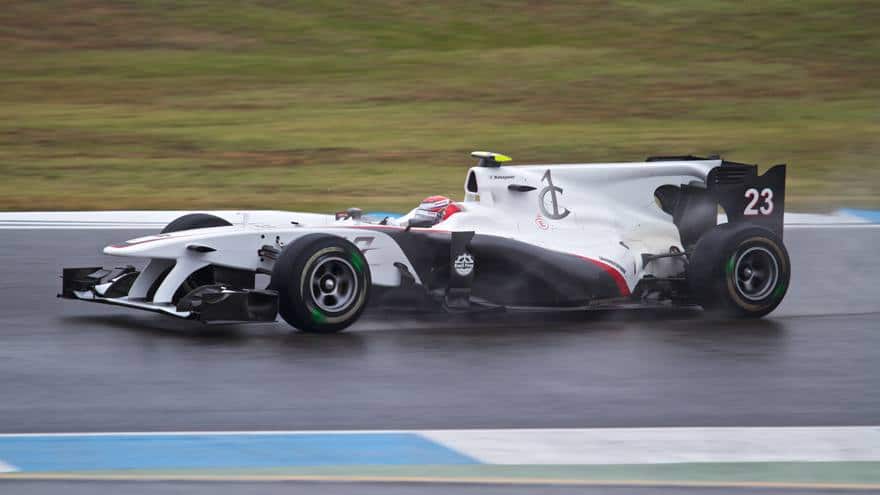 A new era dawned for the team in its 40th season. New engines, new drivers but not a new name…

Due to a late application for a name change the team had to stay BMW Sauber despite having no affiliation with the manufacturer anymore.

After a poor start with reliability issues and no main sponsor, things started to pick up for the team securing a sponsor and points, some of which came from a fantastic drive at the European GP from Kobayashi.

More consistent results led the team to 8th by the end of the season.

Officially back to being Sauber the team started the season with a double disqualification in Melbourne and Sergio Perez suffering a huge crash at Monaco.

Things picked up, however, and regular top ten finishes were established securing 7th in the constructors. 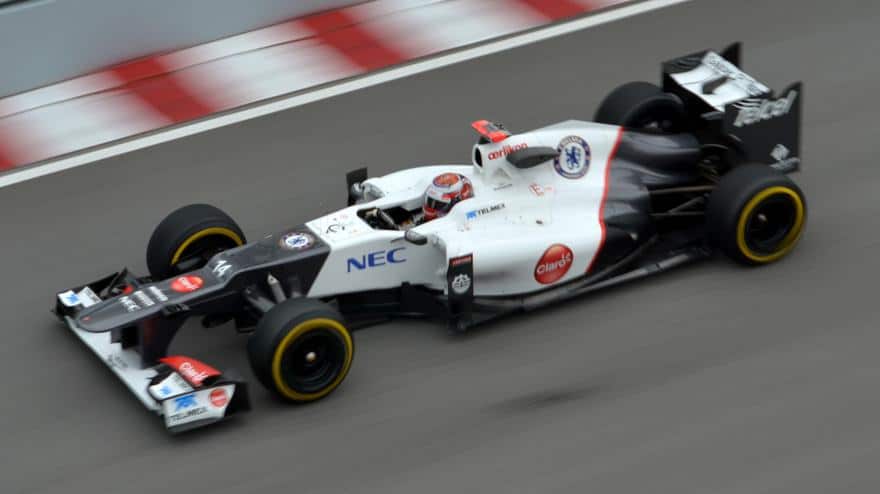 Things continued to get better for the team as they scored a double points finish at Melbourne and in the following race Sergio Perez scored the team’s highest finish as an independent team with a second place at Malaysia.

The team also recorded their best qualifying results in Spa with Kobayashi in second and Perez starting fourth.

The race didn’t quite go to plan for them though as the infamous crash caused by Romain Grosjean on the first corner ended Perez’s race and severely affected Kobayashi resulting in him finishing outside of the points.

Four podiums and 6th in the constructors highlighted this improvement along with one other significant change.

Peter Sauber stepped down as team principal to make way for the first ever female team principal in Monisha Kaltenborn marking it an historic year for the team and Formula 1.

With the label of “future star” Nico Hulkenberg came in to Formula 1 having signed for Sauber. He showed some class and was even able to battle it out with the likes of Hamilton and Alonso in a pretty uncompetitive car.

7th in the constructors was the season’s result

2014 was a year to forget for Sauber. With the new regulations coming to fruition that year the team didn’t get off to a great start consistently going out in Q1 and finished the season with zero points on the board the team looked to be in serious trouble going forward. 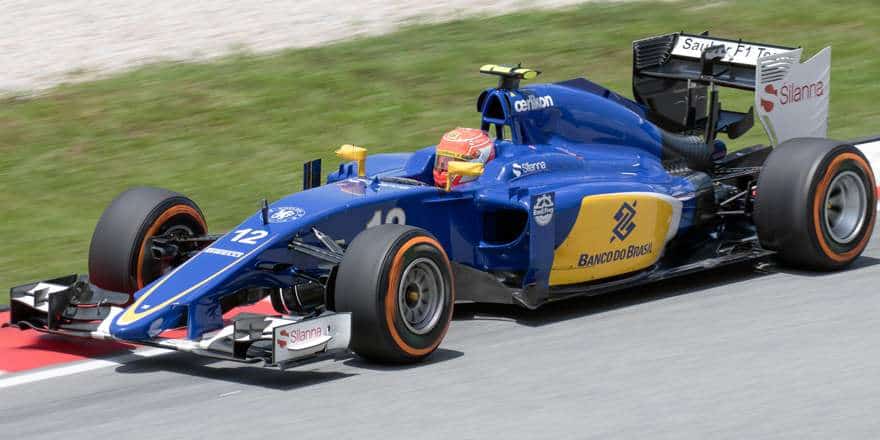 Both Felipe Nasr and Marcus Ericsson brought funding to the team whilst both being considered quick young drivers.

The year wasn’t without controversy however, in the form of Giedo Van Der Garde.

Having promised Van Der Garde a seat for the season Sauber then decided to go with both Nasr and Ericsson forcing Van Der Garde to go public and to court.

The whole process was very messy causing Sauber to sit out on the first free practice of the season in Melbourne. Van Der Garde confirmed that he wouldn’t be racing in Melbourne. This may have had something to do with the $16 Million he received in compensation, settling a very expensive mistake for the team. I suspect Sauber would have been in favour for a three car team at that point.

After all the fuss at the start of the year the team did climb back up the standings finishing 8th with, compared to the previous year’s debacle, a respectable 36 points.

The year also coincided with the team’s 400th Grand Prix at the US Grand Prix in Austin showing the team’s great heritage in Formula 1.

With the team’s future again hanging in the balance due to financial problems, the team was bought by Longbow Finance claiming both Peter Sauber’s and Monisha Kaltenborn’s shares making them the sole owner whilst keeping Kaltenborn on as the team principal.

Last place looked destined to be their final position claiming zero points all the way up until a hectic Brazilian Grand Prix where Felipe Nasr got himself in the points helping the team to finish 1 point ahead of Manor. Hardly a season to remember.

As the 2017 season starts and new regulations are on the table it’s anybody’s guess as to how the season will play out.

However, I think it’s safe to say that we can’t expect too much from Sauber this year.

Using year old Ferrari engines with the token system being taken away, it seems that as the season progresses they could fall further behind the field.

The key for this year would be to push early and try to steal a few points at the beginning of the season to try to keep them off the bottom of the table once again.

2017 will be a season of struggle for Sauber but then that is nothing new to them.

What do you think? Can Sauber perform beyond my very low expectations of them for 2017?