Assen – A Jewel in the MotoGP Crown

The Assen circuit has been included in the Motorcycling Racing Calendar since 1949. Historically, this fact alone holds drawcards for Assen which the newer circuits can only aspire to.

I’ve stayed at 2 locations for my trips to The Netherlands. Oosterwolde, reasonably close to Assen, to the north and at Rotterdam, a favourite place for my stays.

There are many locations. Groningen is popular or even Assen itself.

Groningen is a large town and isn’t far from Assen (about 35kms). 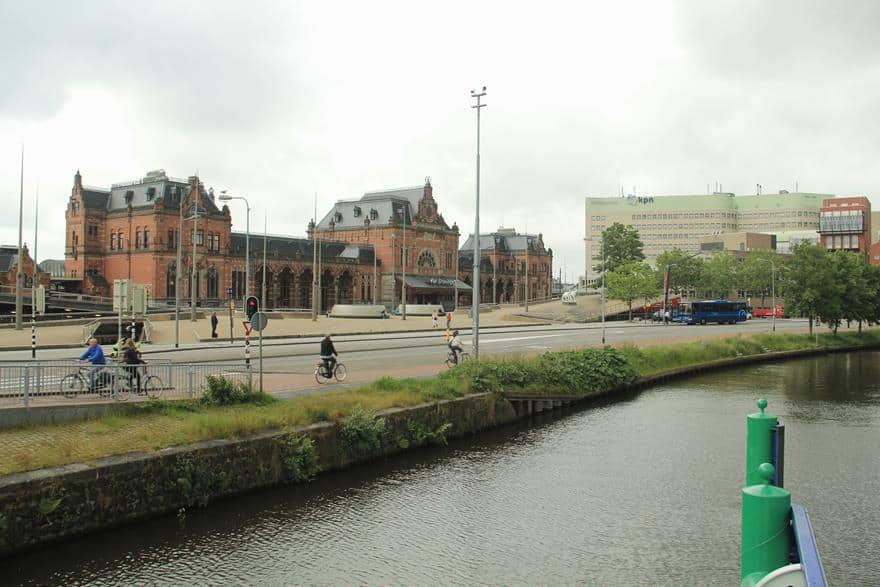 The public transport system of buses and trains within the Netherlands is excellent.

Some trams use the driver for ticket purchase. They insist you go directly to the driver.

Some trams have ticket machines at the entry next to where you swipe your ticket.

I once went looking for the ticket machine and was fined by the Inspector at the rather high rate of 50 euros, for not going directly to the driver.

Be careful, it’s the only law they insist on, I think.

Camping near the Assen circuit is extremely popular. There were camping areas adjacent to the highway, very near the track.

There are many camper vans and mobile homes and tents, utilising the facilities at this location, and the camping areas were packed.

When I stayed at Oosterwolde, at a very nice hotel, there were many UK based fans also staying there. 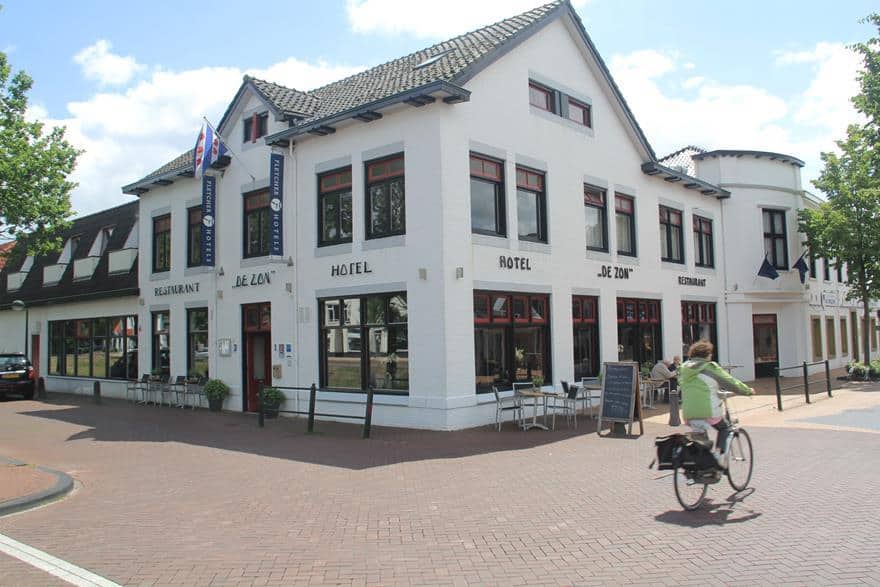 My hotel in Oosterwalde © Steve Saker

The town of Oosterwolde is quite small and most of the roads and areas within the township are paved. Shade trees are prevalent and cleanliness is at perfection levels. It is an extremely nice place to stay. I used hotels.com for any of my hotel accommodations.

To get to Assen is easy. From Oosterwolde, there are inexpensive local buses that run directly to the circuit for the Race Weekend. Once you’re at the Assen train station, the special buses depart from right next door to the station and run directly to the Circuit.

So the popularity of the event makes travel to and from the circuit easy. This service makes travel for the event convenient and shows great management and planning.

I’ve stayed at Rotterdam a couple of times, and from Rotterdam to Assen by the train system, only takes one scheduled stop at Zwolle station. 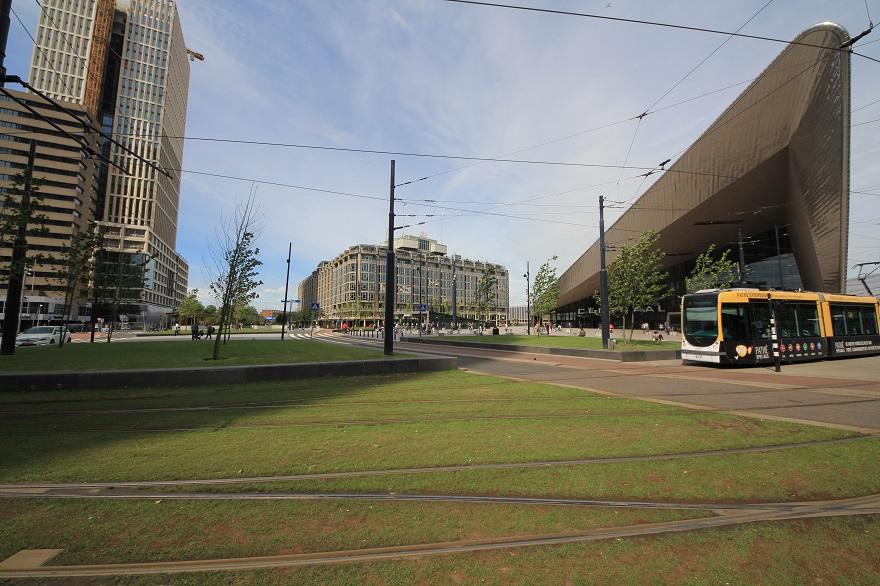 A walk to the other side of that same platform and you’re on your way to Assen. As usual, just follow the yellow VR46 caps and T-shirts if lost or in doubt.

Rotterdam is very modern and safe. The local trams around the city, make this form of transport safe, easy and affordable.

The transport system is efficient and is easy to follow. Canals run through the entirety of The Netherlands and holiday river boats are very popular.

Should you travel from Amsterdam, on a direct route by train to your destination, almost anywhere in Europe, make sure you also purchase the extra ticket supplement on your departure platform. It is only a few euros extra, and without this supplement ticket, once the Inspectors check your ticket, and you’ve not purchased this supplement, you cop a 10 euro fine.

There are also non speaking carriages…for those who prefer peace and quiet.

Amsterdam Main Airport, Schiphol, and the train station are in the same building. Exit one and you’re in the other.

The Netherlands have sorted out public transport which makes Assen is definitely worth the effort.

No doubt, there would be many other cities/towns that offer similar ease of access.

If you could somehow manage to stay at Assen, this would be beneficial BUT you’d need to book probably a year in advance, it is THAT popular.

Assen is so nice a place and caters 100% for visitors that Race Weekend. Every outdoor pub and eating place, within Assen, is packed and the beer and good times flow. I’ve walked from the City center of Assen to the train station quite easily. It’s not too far.

At the track itself, the beer area is popular and the Dutch beer can be up to 15% strength so caution should be exercised and pace yourself for the next lap.

I have used the Winterdijk Tribune stand for both of my attendances at Assen. This open stand is right at the last S bend that leads onto the main straight. 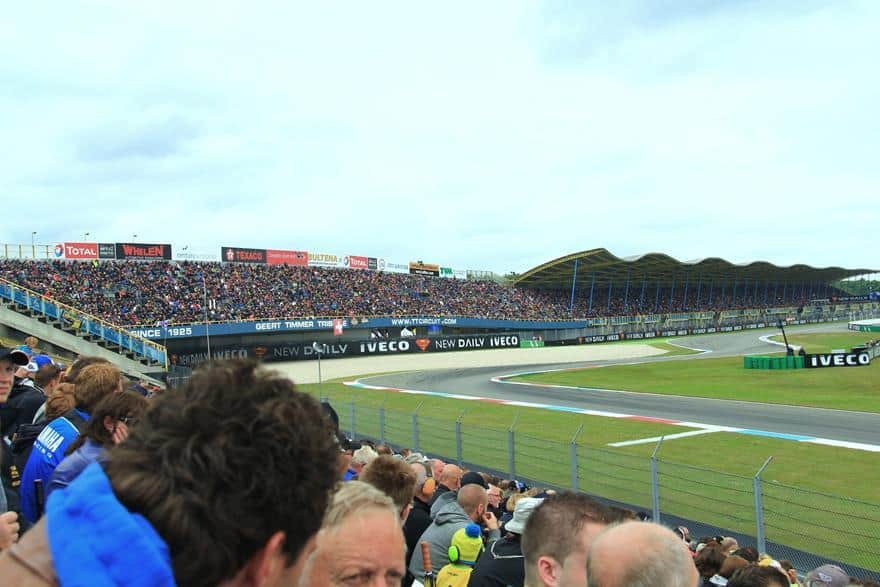 The popularity of the event makes each stand full on race day.

The food places are many. The public toilets are clean and at all the necessary locations.

For Saturday, you are allowed to sit anywhere and you can move about the circuit to any location without any major effort.

The Winterdilk stand is a great location as my photos will show. Having the bikes come out of the fast left hander, leading onto the last S bend, you’re right there helping them make the turn.

For those who use the Ticket Allocation Center to pick up your ordered tickets, this Allocation is located within the Circuit so it is easy and convenient. Phone apps would be the easiest.

I usually carry my day pack: a good poncho folded, a comfortable dual use jacket, my favourite Ducati cap (I bought from their official shop opposite their factory in Italy), my camera and lenses and a good pair of ¾ sized 8 x 40 binoculars.

The necessary phone is always charged and ready even with my back up power source. More about the Ducati factory in my blog on Mugello.

They had sidecars one year in 2013 and to be able to stand next to these things in the pit areas and to appreciate the design and work they put into those 3 wheeled monsters is amazing.

Space framed, the engines are mounted backwards. The exhausts are next to the driver.

The atmosphere out at the track feels exciting. Race day, it is packed.

They have extended the seating along the main straight and there were many free seating areas on grassy hills right at track side. 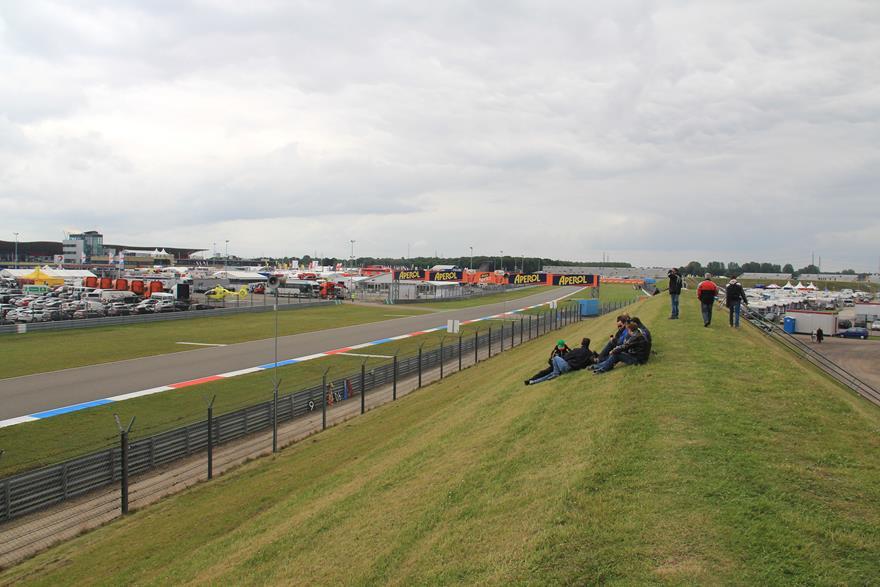 For the sidecar event on the Saturday in 2013, I sat on the grassy hill just before the turns that lead onto Strubben turn. It is great viewing almost everywhere. 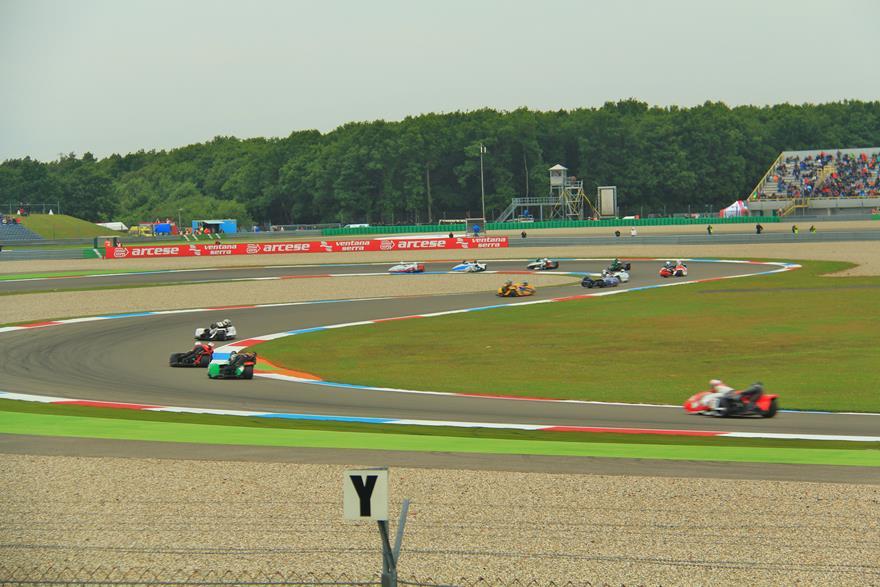 The Strubben at Assen © Steve Saker

The event at the track is well managed. The organization and cleanliness of the Circuit and grounds makes you feel safe.

As usual, the events run on time, and the racing action is so close and spectacular near the seated places.

The excitement on race day, the grid positions, and preparations, make the day excellent.

The weather can be a bit dribbly at times, however, but that’s something we can’t control just yet.

It is a great race weekend. Your viewing and seated positions, combined with the closeness to the on track action, makes Assen really stand out.

My recommendation to attend this track is that it’s a definite must especially for those lucky UK based riders and passengers or those from any neighbouring country, who can make the trip.

It is well attended by the UK fans and you won’t be alone.

Have you been there? What did you think of the Assen experience?